A whopping number of 13F filings filed with U.S. Securities and Exchange Commission has been processed by Insider Monkey so that individual investors can look at the overall hedge fund sentiment towards the stocks included in their watchlists. These freshly-submitted public filings disclose money managers’ equity positions as of the end of the three-month period that ended June 28, so let’s proceed with the discussion of the hedge fund sentiment on Celgene Corporation (NASDAQ:CELG).

Celgene Corporation (NASDAQ:CELG) was in 88 hedge funds’ portfolios at the end of the second quarter of 2019. CELG investors should be aware of a decrease in activity from the world’s largest hedge funds lately. There were 101 hedge funds in our database with CELG positions at the end of the previous quarter. Our calculations also showed that CELG ranks 17th among the 30 most popular stocks among hedge funds.

Unlike some fund managers who are betting on Dow reaching 40000 in a year, our long-short investment strategy doesn’t rely on bull markets to deliver double digit returns. We only rely on hedge fund buy/sell signals. We’re going to take a look at the recent hedge fund action regarding Celgene Corporation (NASDAQ:CELG).

Heading into the third quarter of 2019, a total of 88 of the hedge funds tracked by Insider Monkey held long positions in this stock, a change of -13% from the first quarter of 2019. The graph below displays the number of hedge funds with bullish position in CELG over the last 16 quarters. With hedgies’ positions undergoing their usual ebb and flow, there exists a select group of noteworthy hedge fund managers who were upping their stakes substantially (or already accumulated large positions). 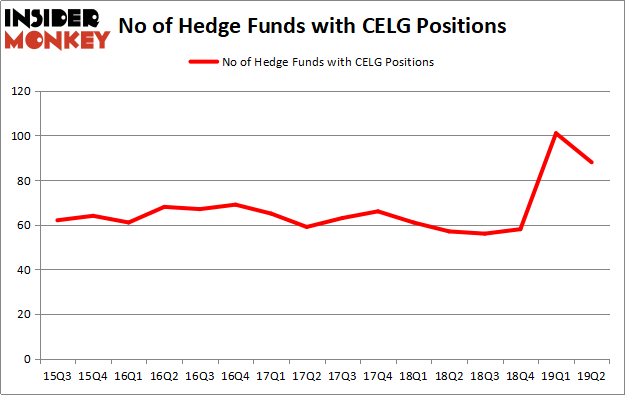 Of the funds tracked by Insider Monkey, Phill Gross and Robert Atchinson’s Adage Capital Management has the largest position in Celgene Corporation (NASDAQ:CELG), worth close to $1.2362 billion, amounting to 3.1% of its total 13F portfolio. Coming in second is William B. Gray of Orbis Investment Management, with a $873 million position; the fund has 6.3% of its 13F portfolio invested in the stock. Other hedge funds and institutional investors that are bullish contain Jim Simons’s Renaissance Technologies, David Abrams’s Abrams Capital Management and Peter Rathjens, Bruce Clarke and John Campbell’s Arrowstreet Capital.

Due to the fact that Celgene Corporation (NASDAQ:CELG) has faced declining sentiment from the smart money, we can see that there is a sect of hedgies who were dropping their entire stakes by the end of the second quarter. It’s worth mentioning that Farallon Capital cut the largest investment of the 750 funds monitored by Insider Monkey, worth an estimated $795.3 million in stock. Seth Klarman’s fund, Baupost Group, also dumped its stock, about $377.4 million worth. These bearish behaviors are important to note, as aggregate hedge fund interest dropped by 13 funds by the end of the second quarter.

As you can see these stocks had an average of 44 hedge funds with bullish positions and the average amount invested in these stocks was $1774 million. That figure was $10570 million in CELG’s case. T-Mobile US, Inc. (NASDAQ:TMUS) is the most popular stock in this table. On the other hand The Bank of Nova Scotia (NYSE:BNS) is the least popular one with only 16 bullish hedge fund positions. Compared to these stocks Celgene Corporation (NASDAQ:CELG) is more popular among hedge funds. Our calculations showed that top 20 most popular stocks among hedge funds returned 24.4% in 2019 through September 30th and outperformed the S&P 500 ETF (SPY) by 4 percentage points. Hedge funds were also right about betting on CELG as the stock returned 7.4% during Q3 and outperformed the market by an even larger margin. Hedge funds were clearly right about piling into this stock relative to other stocks with similar market capitalizations.