Is Exxon Mobil Corporation (NYSE:XOM) a healthy stock for your portfolio? Money managers are buying. The number of long hedge fund bets improved by 1 recently even though hedge fund sentiment towards the stock is near its all time low. Our calculations also showed that XOM ranked 100th and isn’t among the 30 most popular stocks among hedge funds. XOM was in 50 hedge funds’ portfolios at the end of the second quarter of 2019. There were 49 hedge funds in our database with XOM positions at the end of the previous quarter.

Unlike some fund managers who are betting on Dow reaching 40000 in a year, our long-short investment strategy doesn’t rely on bull markets to deliver double digit returns. We only rely on hedge fund buy/sell signals. We’re going to view the recent hedge fund action encompassing Exxon Mobil Corporation (NYSE:XOM). 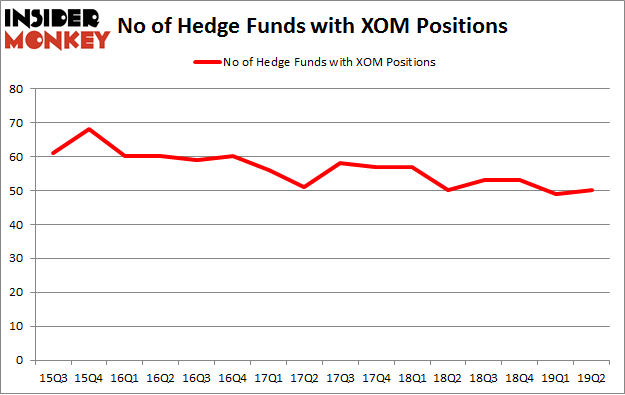 Among these funds, Fisher Asset Management held the most valuable stake in Exxon Mobil Corporation (NYSE:XOM), which was worth $431.5 million at the end of the second quarter. On the second spot was Citadel Investment Group which amassed $228.4 million worth of shares. Moreover, Pzena Investment Management, Yacktman Asset Management, and Adage Capital Management were also bullish on Exxon Mobil Corporation (NYSE:XOM), allocating a large percentage of their portfolios to this stock.

Now, specific money managers have been driving this bullishness. Carlson Capital, managed by Clint Carlson, assembled the most valuable position in Exxon Mobil Corporation (NYSE:XOM). Carlson Capital had $34.3 million invested in the company at the end of the quarter. John Overdeck and David Siegel’s Two Sigma Advisors also initiated a $31.8 million position during the quarter. The other funds with new positions in the stock are Matthew Tewksbury’s Stevens Capital Management, Ilan Assouline’s Circle Road Advisors, and Kenneth Tropin’s Graham Capital Management.

As you can see these stocks had an average of 76.75 hedge funds with bullish positions and the average amount invested in these stocks was $14601 million. That figure was $1332 million in XOM’s case. Mastercard Incorporated (NYSE:MA) is the most popular stock in this table. On the other hand Walmart Inc. (NYSE:WMT) is the least popular one with only 56 bullish hedge fund positions. Compared to these stocks Exxon Mobil Corporation (NYSE:XOM) is even less popular than WMT. Hedge funds dodged a bullet by taking a bearish stance towards XOM. Our calculations showed that the top 20 most popular hedge fund stocks returned 24.4% in 2019 through September 30th and outperformed the S&P 500 ETF (SPY) by 4 percentage points. Unfortunately XOM wasn’t nearly as popular as these 20 stocks (hedge fund sentiment was very bearish); XOM investors were disappointed as the stock returned -6.7% during the third quarter and underperformed the market. If you are interested in investing in large cap stocks with huge upside potential, you should check out the top 20 most popular stocks among hedge funds as many of these stocks already outperformed the market so far in 2019.