At Insider Monkey, we pore over the filings of around 750 top investment firms every quarter, a process we have now completed for the latest reporting period. The data we’ve gathered as a result gives us access to a wealth of collective knowledge based on these firms’ portfolio holdings as of September 30. In this article, we will use that wealth of knowledge to determine whether or not Citigroup Inc. (NYSE:C) makes for a good investment right now.

Citigroup Inc. (NYSE:C) investors should be aware of an increase in enthusiasm from smart money of late. C was in 94 hedge funds’ portfolios at the end of September. There were 83 hedge funds in our database with C positions at the end of the previous quarter. Our calculations also showed that C currently ranks 16th overall among the 30 most popular stocks among hedge funds (see the video below). Later in the article we will also compare Citigroup against similarly valued stocks like HSBC Holdings plc (NYSE:HSBC), Abbott Laboratories (NYSE:ABT), NIKE, Inc. (NYSE:NKE), and Medtronic, plc (NYSE:MDT).

At the end of the third quarter, a total of 94 of the hedge funds tracked by Insider Monkey were long this stock, a change of 13% from the previous quarter. Below, you can check out the change in hedge fund sentiment towards C over the last 17 quarters. So, let’s find out which hedge funds were among the top holders of the stock and which hedge funds were making big moves. 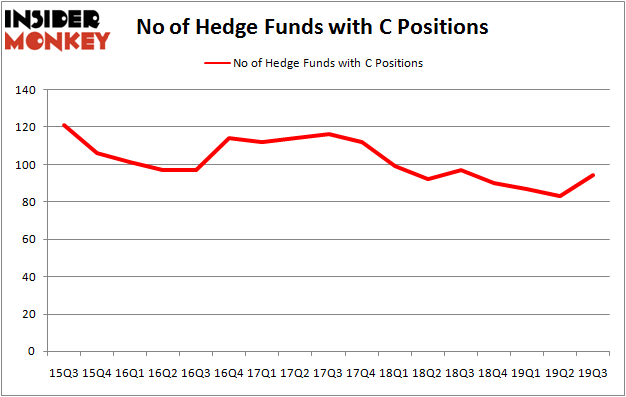 More specifically, ValueAct Capital was the largest shareholder of Citigroup Inc. (NYSE:C), with a stake worth $1936 million reported as of the end of September. Trailing ValueAct Capital was Eagle Capital Management, which amassed a stake valued at $1867.7 million. Greenhaven Associates, Diamond Hill Capital, and Pzena Investment Management were also very fond of the stock, becoming one of the largest hedge fund holders of the company. In terms of the portfolio weights assigned to each position ValueAct Capital allocated the biggest weight to Citigroup Inc. (NYSE:C), around 20.89% of its portfolio. Greenhaven Associates is also relatively very bullish on the stock, earmarking 16.9 percent of its 13F equity portfolio to C.

As one would reasonably expect, some big names were leading the bulls’ herd. Kahn Brothers, founded by Irving Kahn, initiated the most valuable position in Citigroup Inc. (NYSE:C). Kahn Brothers had $73.2 million invested in the company at the end of the quarter. Jeffrey Gendell’s Tontine Asset Management also made a $49 million investment in the stock during the quarter. The other funds with new positions in the stock are Ravi Chopra’s Azora Capital, Peter Seuss’s Prana Capital Management, and Israel Englander’s Millennium Management.

As you can see these stocks had an average of 46.25 hedge funds with bullish positions and the average amount invested in these stocks was $1903 million. That figure was $10271 million in C’s case. NIKE, Inc. (NYSE:NKE) is the most popular stock in this table. On the other hand HSBC Holdings plc (NYSE:HSBC) is the least popular one with only 14 bullish hedge fund positions. Compared to these stocks Citigroup Inc. (NYSE:C) is more popular among hedge funds. Our calculations showed that top 20 most popular stocks among hedge funds returned 34.7% in 2019 through November 22nd and outperformed the S&P 500 ETF (SPY) by 8.5 percentage points. Hedge funds were also right about betting on C as the stock returned 9.2% during Q4 (through 11/22) and outperformed the market by an even larger margin. Hedge funds were clearly right about piling into this stock relative to other stocks with similar market capitalizations.