In these volatile markets we scrutinize hedge fund filings to get a reading on which direction each stock might be going even though the mainstream financial media journalists don’t agree with this approach. We like to check what the smart money thinks first before doing extensive research on a given stock. Although there have been several high profile failed hedge fund picks, the consensus picks among hedge fund investors have historically outperformed the market after adjusting for known risk attributes. It’s not surprising given that hedge funds have access to better information and more resources to predict the winners in the stock market. Keeping this in mind, let’s take a look at whether Berkshire Hathaway Inc. (NYSE:BRK-B) is a good investment right now.

Berkshire Hathaway Inc. (NYSE:BRK-B) was in 113 hedge funds’ portfolios at the end of the fourth quarter of 2019. BRK-B investors should pay attention to an increase in enthusiasm from smart money lately. There were 111 hedge funds in our database with BRK-B holdings at the end of the previous quarter. Our calculations also showed that BRK-B ranked 14th among the 30 most popular stocks among hedge funds (click for Q4 rankings and see the video at the end of this article for Q3 rankings).

Warren Buffett’s Berkshire has consistently been among the top 30 hedge fund stocks since at least the fourth quarter of 2018. When it comes to Warren Buffett hedge funds are just like ordinary investors. They are blinded by Warren Buffett stellar reputation as a shrewd stock picker even though Buffett’s track record over the last 10 years is absolutely pedestrian. In general we believe hedge funds are great at stock picking, but we also noticed that Warren Buffett isn’t the same man who used to beat the market by 20-30 percentage points year in year out.

We leave no stone unturned when looking for the next great investment idea. For example, this trader is claiming triple digit returns, so we check out his latest trade recommendations We are probably at the peak of the COVID-19 pandemic, so we check out this biotech investor’s coronavirus picks. We read hedge fund investor letters and listen to stock pitches at hedge fund conferences (by the way watch this video if you want to hear one of the best healthcare hedge fund manager’s coronavirus analysis). Our best call in 2020 was shorting the market when S&P 500 was trading at 3150 after realizing the coronavirus pandemic’s significance before most investors. Keeping this in mind we’re going to check out the new hedge fund action encompassing Berkshire Hathaway Inc. (NYSE:BRK-B). 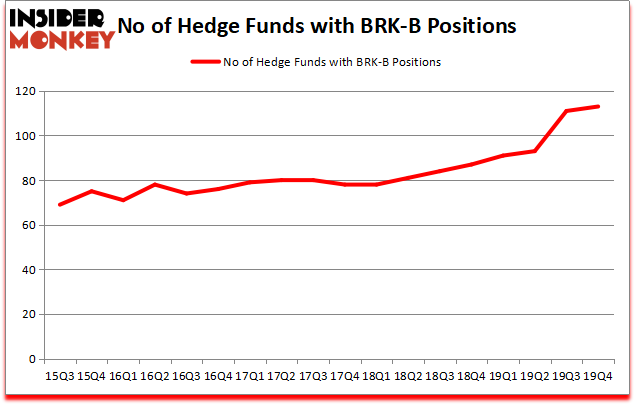 Among these funds, Bill & Melinda Gates Foundation Trust held the most valuable stake in Berkshire Hathaway Inc. (NYSE:BRK.B), which was worth $11305.2 million at the end of the third quarter. On the second spot was Eagle Capital Management which amassed $2317.9 million worth of shares. Gardner Russo & Gardner, Pershing Square, and Diamond Hill Capital were also very fond of the stock, becoming one of the largest hedge fund holders of the company. In terms of the portfolio weights assigned to each position Bill & Melinda Gates Foundation Trust allocated the biggest weight to Berkshire Hathaway Inc. (NYSE:BRK.B), around 52.94% of its 13F portfolio. Punch Card Capital is also relatively very bullish on the stock, earmarking 52.7 percent of its 13F equity portfolio to BRK-B.

As aggregate interest increased, key hedge funds were breaking ground themselves. GQG Partners, managed by Rajiv Jain, created the most outsized position in Berkshire Hathaway Inc. (NYSE:BRK.B). GQG Partners had $229.9 million invested in the company at the end of the quarter. James Crichton’s Hitchwood Capital Management also initiated a $169.9 million position during the quarter. The other funds with new positions in the stock are Shane Finemore’s Manikay Partners, Mubadala Investment’s MIC Capital Partners, and Frank Brosens’s Taconic Capital.

As you can see these stocks had an average of 79.25 hedge funds with bullish positions and the average amount invested in these stocks was $7180 million. That figure was $23616 million in BRK-B’s case. Mastercard Incorporated (NYSE:MA) is the most popular stock in this table. On the other hand AT&T Inc. (NYSE:T) is the least popular one with only 50 bullish hedge fund positions. Berkshire Hathaway Inc. (NYSE:BRK.B) is not the most popular stock in this group but hedge fund interest is still above average. This is a slightly positive signal but we’d rather spend our time researching stocks that hedge funds are piling on. Our calculations showed that top 10 most popular stocks among hedge funds returned 41.4% in 2019 and outperformed the S&P 500 ETF (SPY) by 10.1 percentage points. These stocks lost 1.0% in 2020 through April 20th but beat the market by 11 percentage points.

Highlights From Upslope Capital Management’s 2020 Q1 Investor Letter
Monthly Newsletter Strategy
Download a free copy of our newsletter and see the details inside!
Hedge Fund Resource Center
Related News
Top 10 Hedge Fund Stocks Are Killing The Market 5 Stock Picks from the Hedge Fund Manager Who Saw The Pandemic Coming Good Times, Bad Times Hell is Coming: Here is the Mathematical Proof Hedge Funds Have Never Been Less Bullish On Halliburton Company (HAL) Plunge Protection Team Gives You Another Opportunity To Short The Market Hedge Funds Have Never Been This Bullish On Berkshire Hathaway (BRK.B) Top 10 Shipping Companies in the World in 2020 15 Unfriendliest Cities in the US in 2020 11 Largest Oil Reserves By Country In The World in 2020
Billionaire Hedge Funds