Is MyoKardia, Inc. (NASDAQ:MYOK) a good place to invest some of your money right now? We can gain invaluable insight to help us answer that question by studying the investment trends of top investors, who employ world-class Ivy League graduates, who are given immense resources and industry contacts to put their financial expertise to work. The top picks of these firms have historically outperformed the market when we account for known risk factors, making them very valuable investment ideas.

Is MyoKardia, Inc. (NASDAQ:MYOK) the right pick for your portfolio? Money managers are taking a pessimistic view. The number of long hedge fund positions retreated by 1 lately. Our calculations also showed that MYOK isn’t among the 30 most popular stocks among hedge funds (click for Q3 rankings and see the video below for Q2 rankings). MYOK was in 23 hedge funds’ portfolios at the end of September. There were 24 hedge funds in our database with MYOK holdings at the end of the previous quarter. Later in the article we will compare MYOK against similarly valued peers such as Urban Edge Properties (NYSE:UE), PROS Holdings, Inc. (NYSE:PRO), AAON, Inc. (NASDAQ:AAON), and Fox Factory Holding Corp (NASDAQ:FOXF).

In the eyes of most shareholders, hedge funds are seen as unimportant, outdated investment vehicles of years past. While there are over 8000 funds with their doors open at the moment, We look at the crème de la crème of this group, around 750 funds. It is estimated that this group of investors preside over the majority of the hedge fund industry’s total capital, and by watching their unrivaled stock picks, Insider Monkey has identified many investment strategies that have historically outrun the market. Insider Monkey’s flagship short hedge fund strategy beat the S&P 500 short ETFs by around 20 percentage points annually since its inception in May 2014. Our portfolio of short stocks lost 27.8% since February 2017 (through November 21st) even though the market was up more than 39% during the same period. We just shared a list of 7 short targets in our latest quarterly update .

Unlike the largest US hedge funds that are convinced Dow will soar past 40,000 or the world’s most bearish hedge fund that’s more convinced than ever that a crash is coming, our long-short investment strategy doesn’t rely on bull or bear markets to deliver double digit returns. We only rely on the best performing hedge funds‘ buy/sell signals. We’re going to take a look at the latest hedge fund action encompassing MyoKardia, Inc. (NASDAQ:MYOK).

Heading into the fourth quarter of 2019, a total of 23 of the hedge funds tracked by Insider Monkey held long positions in this stock, a change of -4% from the second quarter of 2019. The graph below displays the number of hedge funds with bullish position in MYOK over the last 17 quarters. With hedge funds’ sentiment swirling, there exists a select group of noteworthy hedge fund managers who were boosting their stakes significantly (or already accumulated large positions). 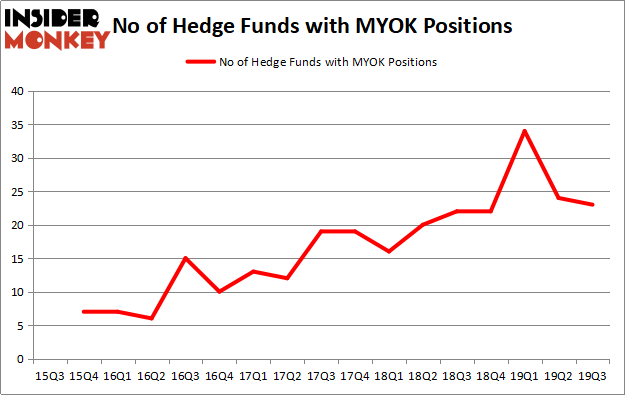 Among these funds, Farallon Capital held the most valuable stake in MyoKardia, Inc. (NASDAQ:MYOK), which was worth $105.9 million at the end of the third quarter. On the second spot was venBio Select Advisor which amassed $81 million worth of shares. Baker Bros. Advisors, Casdin Capital, and Partner Fund Management were also very fond of the stock, becoming one of the largest hedge fund holders of the company. In terms of the portfolio weights assigned to each position Casdin Capital allocated the biggest weight to MyoKardia, Inc. (NASDAQ:MYOK), around 6.45% of its 13F portfolio. Foresite Capital is also relatively very bullish on the stock, earmarking 5.95 percent of its 13F equity portfolio to MYOK.

Seeing as MyoKardia, Inc. (NASDAQ:MYOK) has experienced falling interest from hedge fund managers, logic holds that there is a sect of hedgies that elected to cut their full holdings heading into Q4. Intriguingly, Israel Englander’s Millennium Management cut the largest position of the “upper crust” of funds watched by Insider Monkey, valued at an estimated $13.1 million in stock, and Renaissance Technologies was right behind this move, as the fund dropped about $6.2 million worth. These bearish behaviors are interesting, as total hedge fund interest fell by 1 funds heading into Q4.

As you can see these stocks had an average of 13.5 hedge funds with bullish positions and the average amount invested in these stocks was $90 million. That figure was $786 million in MYOK’s case. PROS Holdings, Inc. (NYSE:PRO) is the most popular stock in this table. On the other hand AAON, Inc. (NASDAQ:AAON) is the least popular one with only 6 bullish hedge fund positions. MyoKardia, Inc. (NASDAQ:MYOK) is not the most popular stock in this group but hedge fund interest is still above average. Our calculations showed that top 20 most popular stocks among hedge funds returned 37.4% in 2019 through the end of November and outperformed the S&P 500 ETF (SPY) by 9.9 percentage points. Hedge funds were also right about betting on MYOK as the stock returned 24.9% during the fourth quarter (through the end of November) and outperformed the market. Hedge funds were rewarded for their relative bullishness.