Hedge Funds Have Never Been This Bullish On W.R. Berkley Corporation (WRB)

W.R. Berkley Corporation (NYSE:WRB) was in 23 hedge funds’ portfolios at the end of the fourth quarter of 2018. WRB investors should be aware of an increase in hedge fund interest of late. There were 17 hedge funds in our database with WRB holdings at the end of September. Overall hedge fund sentiment towards VAR is at its all time high. This is usually a bullish indicator. For example hedge fund sentiment in Xilinx Inc. (XLNX) was also at its all time high at the beginning of this year and the stock returned more than 46% in 2.5 months. We observed a similar performance from Progressive Corporation (PGR) which returned 27% and MSCI which returned 29%. Both stocks outperformed the S&P 500 Index by 14 and 16 percentage points respectively. Hedge fund sentiment towards IQVIA Holdings Inc. (IQV), Brookfield Asset Management Inc. (BAM), Atlassian Corporation Plc (TEAM), RCL, MTB, VAR and CRH hit all time highs at the end of December, and all of these stocks returned more than 20% in the first 2.5 months of this year.

What does the smart money think about W.R. Berkley Corporation (NYSE:WRB)?

Heading into the first quarter of 2019, a total of 23 of the hedge funds tracked by Insider Monkey were bullish on this stock, a change of 35% from the previous quarter. Below, you can check out the change in hedge fund sentiment towards WRB over the last 14 quarters. With hedge funds’ sentiment swirling, there exists an “upper tier” of noteworthy hedge fund managers who were upping their stakes meaningfully (or already accumulated large positions). 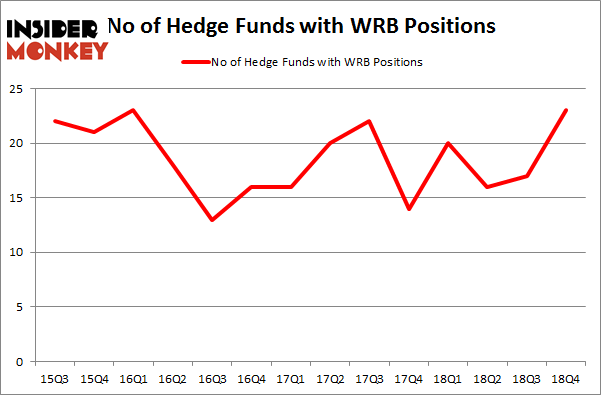 Among these funds, Polar Capital held the most valuable stake in W.R. Berkley Corporation (NYSE:WRB), which was worth $73.2 million at the end of the third quarter. On the second spot was Renaissance Technologies which amassed $56 million worth of shares. Moreover, Balyasny Asset Management, AQR Capital Management, and GAMCO Investors were also bullish on W.R. Berkley Corporation (NYSE:WRB), allocating a large percentage of their portfolios to this stock.

As aggregate interest increased, key money managers were breaking ground themselves. Blue Mountain Capital, managed by Andrew Feldstein and Stephen Siderow, established the most outsized position in W.R. Berkley Corporation (NYSE:WRB). Blue Mountain Capital had $2.4 million invested in the company at the end of the quarter. Brandon Haley’s Holocene Advisors also initiated a $0.7 million position during the quarter. The other funds with new positions in the stock are Matthew Hulsizer’s PEAK6 Capital Management, Hoon Kim’s Quantinno Capital, and John Osterweis’s Osterweis Capital Management.

As you can see these stocks had an average of 35.75 hedge funds with bullish positions and the average amount invested in these stocks was $957 million. That figure was $257 million in WRB’s case. Twilio Inc. (NYSE:TWLO) is the most popular stock in this table. On the other hand Noble Energy, Inc. (NYSE:NBL) is the least popular one with only 26 bullish hedge fund positions. Compared to these stocks W.R. Berkley Corporation (NYSE:WRB) is even less popular than NBL though hedge fund sentiment towards the stock is at its all time high. Our calculations showed that the top 15 most popular stocks among hedge funds returned 21.3% through April 8th and outperformed the S&P 500 ETF (SPY) by more than 5 percentage points. Hedge funds were also right about betting on WRB, though not to the same extent, as the stock returned 16.0% and delivered solid gains as well.