Is Planet Fitness Inc (NYSE:PLNT) a buy, sell, or hold? Hedge funds are getting more bullish. The number of bullish hedge fund bets went up by 13 recently. Our calculations also showed that PLNT isn’t among the 30 most popular stocks among hedge funds (view the video below).

To the average investor there are many signals market participants put to use to analyze publicly traded companies. A pair of the most underrated signals are hedge fund and insider trading signals. We have shown that, historically, those who follow the best picks of the best money managers can outclass the market by a solid margin (see the details here).

Unlike some fund managers who are betting on Dow reaching 40000 in a year, our long-short investment strategy doesn’t rely on bull markets to deliver double digit returns. We only rely on hedge fund buy/sell signals. Let’s check out the fresh hedge fund action encompassing Planet Fitness Inc (NYSE:PLNT).

At Q2’s end, a total of 38 of the hedge funds tracked by Insider Monkey were long this stock, a change of 52% from the first quarter of 2019. The graph below displays the number of hedge funds with bullish position in PLNT over the last 16 quarters. With hedgies’ sentiment swirling, there exists a few key hedge fund managers who were adding to their stakes considerably (or already accumulated large positions). 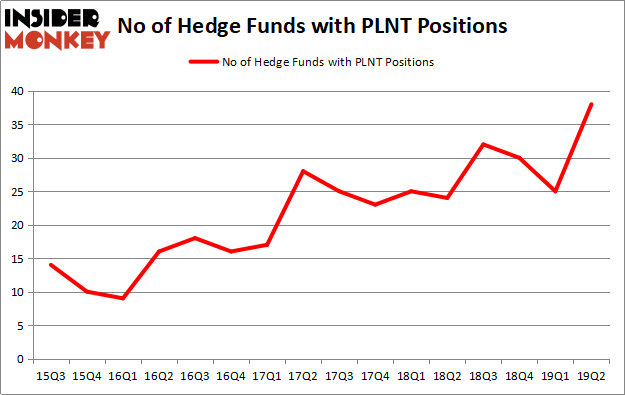 Among these funds, Millennium Management held the most valuable stake in Planet Fitness Inc (NYSE:PLNT), which was worth $99.6 million at the end of the second quarter. On the second spot was Two Sigma Advisors which amassed $96.3 million worth of shares. Moreover, Pelham Capital, Waratah Capital Advisors, and Junto Capital Management were also bullish on Planet Fitness Inc (NYSE:PLNT), allocating a large percentage of their portfolios to this stock.