Hedge Funds Have Never Been This Bullish On FTS International, Inc. (FTSI)

While the market driven by short-term sentiment influenced by uncertainty regarding the future of the interest rate environment in the US, declining oil prices and the trade war with China, many smart money investors kept their optimism regarding the current bull run in the fourth quarter, while still hedging many of their long positions. However, as we know, big investors usually buy stocks with strong fundamentals, which is why we believe we can profit from imitating them. In this article, we are going to take a look at the smart money sentiment surrounding FTS International, Inc. (NYSE:FTSI).

FTS International, Inc. (NYSE:FTSI) was in 22 hedge funds’ portfolios at the end of December. FTSI has seen an increase in enthusiasm from smart money recently. There were 21 hedge funds in our database with FTSI positions at the end of the previous quarter. Our calculations also showed that FTSI isn’t among the 30 most popular stocks among hedge funds.

What does the smart money think about FTS International, Inc. (NYSE:FTSI)?

At Q4’s end, a total of 22 of the hedge funds tracked by Insider Monkey were long this stock, a change of 5% from the previous quarter. By comparison, 19 hedge funds held shares or bullish call options in FTSI a year ago. With the smart money’s capital changing hands, there exists an “upper tier” of notable hedge fund managers who were upping their stakes substantially (or already accumulated large positions). 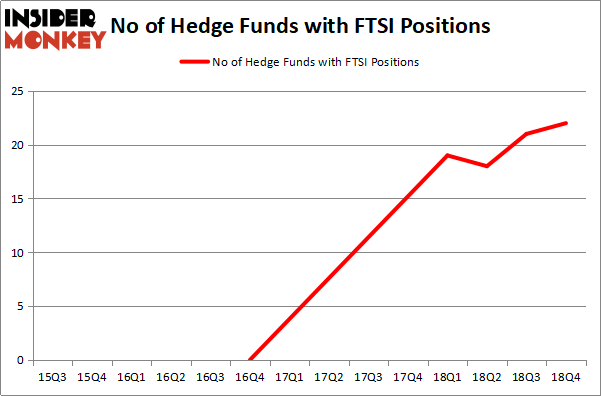 When looking at the institutional investors followed by Insider Monkey, Israel Englander’s Millennium Management has the number one position in FTS International, Inc. (NYSE:FTSI), worth close to $24.9 million, corresponding to less than 0.1%% of its total 13F portfolio. The second largest stake is held by Citadel Investment Group, managed by Ken Griffin, which holds a $13 million position; the fund has less than 0.1%% of its 13F portfolio invested in the stock. Other members of the smart money that are bullish include Didric Cederholm’s Lion Point, Anand Parekh’s Alyeska Investment Group and Phill Gross and Robert Atchinson’s Adage Capital Management.

With a general bullishness amongst the heavyweights, some big names have been driving this bullishness. Alyeska Investment Group, managed by Anand Parekh, established the biggest position in FTS International, Inc. (NYSE:FTSI). Alyeska Investment Group had $8.2 million invested in the company at the end of the quarter. Sara Nainzadeh’s Centenus Global Management also initiated a $1.8 million position during the quarter. The other funds with new positions in the stock are Steve Pattyn’s Yaupon Capital, Louis Bacon’s Moore Global Investments, and Paul Marshall and Ian Wace’s Marshall Wace LLP.

As you can see these stocks had an average of 14.25 hedge funds with bullish positions and the average amount invested in these stocks was $101 million. That figure was $86 million in FTSI’s case. Puma Biotechnology Inc (NASDAQ:PBYI) is the most popular stock in this table. On the other hand Meridian Bancorp, Inc. (NASDAQ:EBSB) is the least popular one with only 10 bullish hedge fund positions. FTS International, Inc. (NYSE:FTSI) is not the most popular stock in this group but hedge fund interest is still above average. Our calculations showed that top 15 most popular stocks) among hedge funds returned 24.2% through April 22nd and outperformed the S&P 500 ETF (SPY) by more than 7 percentage points. Hedge funds were also right about betting on FTSI as the stock returned 67.5% and outperformed the market by an even larger margin. Hedge funds were rewarded for their relative bullishness.