Hedge Funds Have Never Been This Bullish On Fresenius Medical Care AG (FMS)?

Hedge fund managers like David Einhorn, Bill Ackman, or Carl Icahn became billionaires through reaping large profits for their investors, which is why piggybacking their stock picks may provide us with significant returns as well. Many hedge funds, like Paul Singer’s Elliott Management, are pretty secretive, but we can still get some insights by analyzing their quarterly 13F filings. One of the most fertile grounds for large abnormal returns is hedge funds’ most popular small-cap picks, which are not so widely followed and often trade at a discount to their intrinsic value. In this article we will check out hedge fund activity in another small-cap stock: Fresenius Medical Care AG & Co. KGaA (NYSE:FMS).

Is Fresenius Medical Care AG & Co. KGaA (NYSE:FMS) a worthy investment today? Hedge funds are buying. The number of long hedge fund bets went up by 2 in recent months. Overall hedge fund sentiment towards FMS is at its all time high. This is usually a very bullish signal. For example hedge fund sentiment in Xilinx Inc. (XLNX) was also at its all time high at the beginning of this year and the stock returned more than 46% in 2.5 months. We observed a similar performance from Progressive Corporation (PGR) which returned 27% and outperformed the SPY by nearly 14 percentage points in 2.5 months. Hedge fund sentiment towards IQVIA Holdings Inc. (IQV), Brookfield Asset Management Inc. (BAM), Atlassian Corporation Plc (TEAM), RCL, MTB, and CRH hit all time highs at the end of December, and all of these stocks returned more than 20% in the first 2.5 months of this year.

At the end of the fourth quarter, a total of 8 of the hedge funds tracked by Insider Monkey held long positions in this stock, a change of 33% from one quarter earlier. On the other hand, there were a total of 8 hedge funds with a bullish position in FMS a year ago. With hedgies’ sentiment swirling, there exists a select group of key hedge fund managers who were upping their stakes meaningfully (or already accumulated large positions). 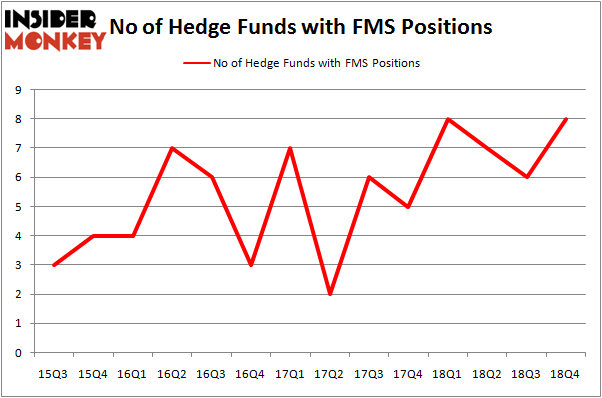 When looking at the institutional investors followed by Insider Monkey, Peter Rathjens, Bruce Clarke and John Campbell’s Arrowstreet Capital has the largest position in Fresenius Medical Care AG & Co. KGaA (NYSE:FMS), worth close to $11.8 million, comprising less than 0.1%% of its total 13F portfolio. The second largest stake is held by Renaissance Technologies, managed by Jim Simons, which holds a $8.1 million position; the fund has less than 0.1%% of its 13F portfolio invested in the stock. Some other peers that hold long positions comprise Israel Englander’s Millennium Management, D. E. Shaw’s D E Shaw and Paul Marshall and Ian Wace’s Marshall Wace LLP.

As one would reasonably expect, key money managers were leading the bulls’ herd. Millennium Management, managed by Israel Englander, created the most valuable position in Fresenius Medical Care AG & Co. KGaA (NYSE:FMS). Millennium Management had $7.6 million invested in the company at the end of the quarter. Paul Marshall and Ian Wace’s Marshall Wace LLP also made a $3.3 million investment in the stock during the quarter. The other funds with brand new FMS positions are John Overdeck and David Siegel’s Two Sigma Advisors and Matthew Tewksbury’s Stevens Capital Management.

As you can see these stocks had an average of 26.25 hedge funds with bullish positions and the average amount invested in these stocks was $483 million. That figure was $40 million in FMS’s case. Discover Financial Services (NYSE:DFS) is the most popular stock in this table. On the other hand TELUS Corporation (NYSE:TU) is the least popular one with only 11 bullish hedge fund positions. Compared to these stocks Fresenius Medical Care AG & Co. KGaA (NYSE:FMS) is even less popular than TU. Our calculations showed that top 15 most popular stocks among hedge funds returned 19.7% through March 15th and outperformed the S&P 500 ETF (SPY) by 6.6 percentage points. Hedge funds were also right about betting on FMS as the stock returned 21.4% and outperformed the market as well.