Insider Monkey has processed numerous 13F filings of hedge funds and successful value investors to create an extensive database of hedge fund holdings. The 13F filings show the hedge funds’ and successful investors’ positions as of the end of the third quarter. You can find articles about an individual hedge fund’s trades on numerous financial news websites. However, in this article we will take a look at their collective moves over the last 4 years and analyze what the smart money thinks of Fiserv, Inc. (NASDAQ:FISV) based on that data.

Fiserv, Inc. (NASDAQ:FISV) investors should be aware of an increase in support from the world’s most elite money managers lately. FISV was in 73 hedge funds’ portfolios at the end of the third quarter of 2019. There were 48 hedge funds in our database with FISV holdings at the end of the previous quarter. Our calculations also showed that FISV ranked 29th among the 30 most popular stocks among hedge funds (see the video below).

At Q3’s end, a total of 73 of the hedge funds tracked by Insider Monkey were bullish on this stock, a change of 52% from the second quarter of 2019. Below, you can check out the change in hedge fund sentiment towards FISV over the last 17 quarters. So, let’s examine which hedge funds were among the top holders of the stock and which hedge funds were making big moves. 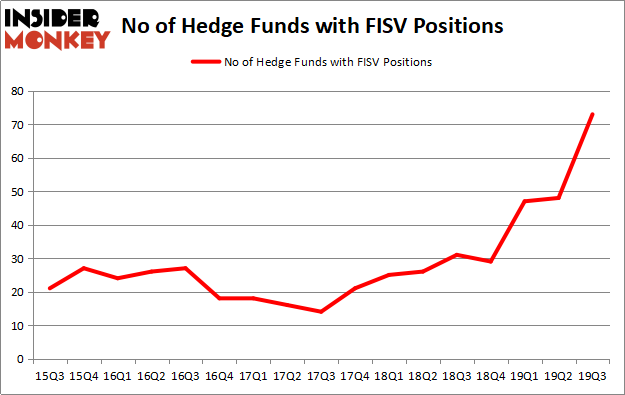 Among these funds, Egerton Capital Limited held the most valuable stake in Fiserv, Inc. (NASDAQ:FISV), which was worth $548.5 million at the end of the third quarter. On the second spot was Eagle Capital Management which amassed $383.6 million worth of shares. Kensico Capital, Glenview Capital, and Steadfast Capital Management were also very fond of the stock, becoming one of the largest hedge fund holders of the company. In terms of the portfolio weights assigned to each position Toscafund Asset Management allocated the biggest weight to Fiserv, Inc. (NASDAQ:FISV), around 16.98% of its portfolio. Omega Advisors is also relatively very bullish on the stock, setting aside 12.92 percent of its 13F equity portfolio to FISV.

As aggregate interest increased, some big names were leading the bulls’ herd. Glenview Capital, managed by Larry Robbins, assembled the biggest position in Fiserv, Inc. (NASDAQ:FISV). Glenview Capital had $281.5 million invested in the company at the end of the quarter. Robert Pitts’s Steadfast Capital Management also made a $217.4 million investment in the stock during the quarter. The other funds with new positions in the stock are Leon Cooperman’s Omega Advisors, Gabriel Plotkin’s Melvin Capital Management, and James Parsons’s Junto Capital Management.

Let’s now review hedge fund activity in other stocks similar to Fiserv, Inc. (NASDAQ:FISV). We will take a look at Celgene Corporation (NASDAQ:CELG), Automatic Data Processing (NASDAQ:ADP), Duke Energy Corporation (NYSE:DUK), and The Bank of Nova Scotia (NYSE:BNS). All of these stocks’ market caps are closest to FISV’s market cap.

As you can see these stocks had an average of 46.25 hedge funds with bullish positions and the average amount invested in these stocks was $4408 million. That figure was $3875 million in FISV’s case. Celgene Corporation (NASDAQ:CELG) is the most popular stock in this table. On the other hand The Bank of Nova Scotia (NYSE:BNS) is the least popular one with only 15 bullish hedge fund positions. Fiserv, Inc. (NASDAQ:FISV) is not the most popular stock in this group but hedge fund interest is still above average. Our calculations showed that top 20 most popular stocks among hedge funds returned 34.7% in 2019 through November 22nd and outperformed the S&P 500 ETF (SPY) by 8.5 percentage points. Hedge funds were also right about betting on FISV as the stock returned 10% during the fourth quarter (through 11/22) and outperformed the market. Hedge funds were rewarded for their relative bullishness.