Is Coupa Software Incorporated (NASDAQ:COUP) an exceptional investment today? The best stock pickers are getting more optimistic. The number of long hedge fund bets inched up by 5 in recent months. Overall hedge fund sentiment towards the stock currently sits at its all time. This is usually a bullish signal. We observed this in three other stocks: Adobe, Disney and Worldpay. Disney outperformed the market by 23 percentage points whereas Worldpay and Adobe beat it by 6 points.

How have hedgies been trading Coupa Software Incorporated (NASDAQ:COUP)?

At the end of the first quarter, a total of 41 of the hedge funds tracked by Insider Monkey held long positions in this stock, a change of 14% from the fourth quarter of 2018. Below, you can check out the change in hedge fund sentiment towards COUP over the last 15 quarters. With hedgies’ sentiment swirling, there exists an “upper tier” of noteworthy hedge fund managers who were adding to their holdings substantially (or already accumulated large positions). 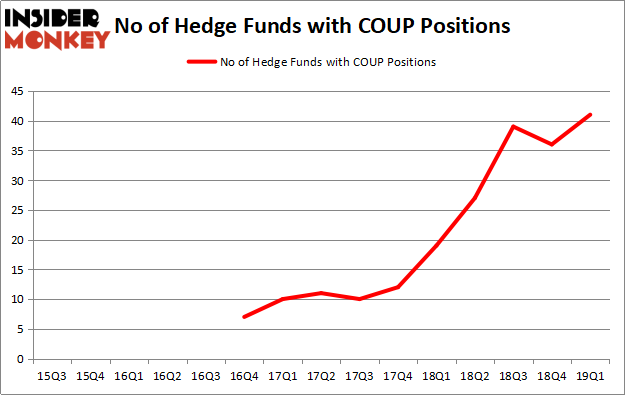 As you can see these stocks had an average of 16.5 hedge funds with bullish positions and the average amount invested in these stocks was $272 million. That figure was $1385 million in COUP’s case. First Solar, Inc. (NASDAQ:FSLR) is the most popular stock in this table. On the other hand Leggett & Platt, Inc. (NYSE:LEG) is the least popular one with only 10 bullish hedge fund positions. Compared to these stocks Coupa Software Incorporated (NASDAQ:COUP) is more popular among hedge funds. Our calculations showed that top 20 most popular stocks among hedge funds returned 6.2% in Q2 through June 19th and outperformed the S&P 500 ETF (SPY) by nearly 3 percentage points. Hedge funds were also right about betting on COUP as the stock returned 39.5% during the same period and outperformed the market by an even larger margin. Hedge funds were clearly right about piling into this stock relative to other stocks with similar market capitalizations.