Hedge Funds Have Never Been This Bullish On CareTrust REIT, Inc. (CTRE)

Hedge Funds and other institutional investors have just completed filing their 13Fs with the Securities and Exchange Commission, revealing their equity portfolios as of the end of December. At Insider Monkey, we follow nearly 750 active hedge funds and notable investors and by analyzing their 13F filings, we can determine the stocks that they are collectively bullish on. One of their picks is CareTrust REIT, Inc. (NASDAQ:CTRE), so let’s take a closer look at the sentiment that surrounds it in the current quarter.

Is CareTrust REIT, Inc. (NASDAQ:CTRE) a bargain? Money managers are getting more optimistic. The number of bullish hedge fund positions moved up by 5 lately. Our calculations also showed that CTRE isn’t among the 30 most popular stocks among hedge funds. CTRE was in 16 hedge funds’ portfolios at the end of the fourth quarter of 2018. There were 11 hedge funds in our database with CTRE positions at the end of the previous quarter.

Heading into the first quarter of 2019, a total of 16 of the hedge funds tracked by Insider Monkey were bullish on this stock, a change of 45% from one quarter earlier. The graph below displays the number of hedge funds with bullish position in CTRE over the last 14 quarters. With the smart money’s sentiment swirling, there exists a select group of key hedge fund managers who were adding to their stakes substantially (or already accumulated large positions). 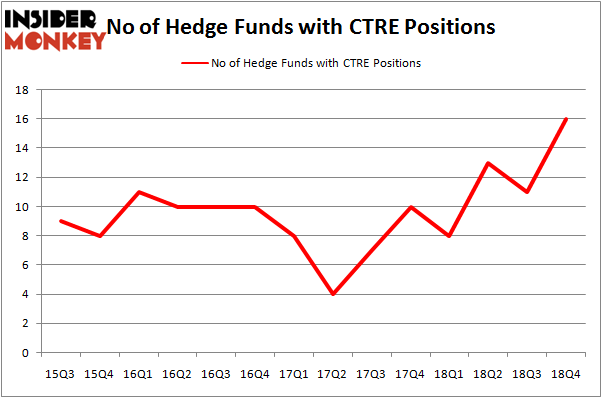 When looking at the institutional investors followed by Insider Monkey, Israel Englander’s Millennium Management has the biggest position in CareTrust REIT, Inc. (NASDAQ:CTRE), worth close to $37 million, accounting for 0.1% of its total 13F portfolio. The second largest stake is held by Carlson Capital, led by Clint Carlson, holding a $32.7 million position; 0.5% of its 13F portfolio is allocated to the stock. Other members of the smart money with similar optimism encompass Jim Simons’s Renaissance Technologies, John Overdeck and David Siegel’s Two Sigma Advisors and D. E. Shaw’s D E Shaw.

As industrywide interest jumped, some big names have jumped into CareTrust REIT, Inc. (NASDAQ:CTRE) headfirst. HBK Investments, managed by David Costen Haley, established the biggest position in CareTrust REIT, Inc. (NASDAQ:CTRE). HBK Investments had $1 million invested in the company at the end of the quarter. Paul Marshall and Ian Wace’s Marshall Wace LLP also made a $0.6 million investment in the stock during the quarter. The other funds with brand new CTRE positions are Benjamin A. Smith’s Laurion Capital Management and Minhua Zhang’s Weld Capital Management.

As you can see these stocks had an average of 16.75 hedge funds with bullish positions and the average amount invested in these stocks was $168 million. That figure was $126 million in CTRE’s case. The Simply Good Foods Company (NASDAQ:SMPL) is the most popular stock in this table. On the other hand CVR Refining LP (NYSE:CVRR) is the least popular one with only 7 bullish hedge fund positions. CareTrust REIT, Inc. (NASDAQ:CTRE) is not the least popular stock in this group but hedge fund interest is still below average. Our calculations showed that top 15 most popular stocks) among hedge funds returned 24.2% through April 22nd and outperformed the S&P 500 ETF (SPY) by more than 7 percentage points. A small number of hedge funds were also right about betting on CTRE as the stock returned 26.6% and outperformed the market by an even larger margin.