Hedge Funds Have Never Been This Bullish On Berkshire Hathaway Inc. (BRK-B)

Concerns over rising interest rates and expected further rate increases have hit several stocks hard during the fourth quarter. Trends reversed 180 degrees during the first quarter amid Powell’s pivot and optimistic expectations towards a trade deal with China. Hedge funds and institutional investors tracked by Insider Monkey usually invest a disproportionate amount of their portfolios in smaller cap stocks. We have been receiving indications that hedge funds were increasing their overall exposure in the first quarter and this is one of the factors behind the recent movements in major indices. In this article, we will take a closer look at hedge fund sentiment towards Berkshire Hathaway Inc. (NYSE:BRK-B).

Berkshire Hathaway Inc. (NYSE:BRK-B) was in 91 hedge funds’ portfolios at the end of the first quarter of 2019. BRK-B investors should be aware of an increase in enthusiasm from smart money lately. There were 87 hedge funds in our database with BRK-B positions at the end of the previous quarter. Our calculations also showed that BRK-B ranked 17th among the 30 most popular stocks among hedge funds. Overall hedge fund sentiment towards Berkshire is surprisingly at its all time high. We observed this in three other stocks: Disney Worldpay, and Adobe Systems. Disney outperformed the market by 20 percentage points whereas Worldpay and Adobe beat it by 8 and 4 points respectively.

How have hedgies been trading Berkshire Hathaway Inc. (NYSE:BRK.B)?

At the end of the first quarter, a total of 91 of the hedge funds tracked by Insider Monkey held long positions in this stock, a change of 5% from one quarter earlier. The graph below displays the number of hedge funds with bullish position in BRK-B over the last 15 quarters. With hedgies’ positions undergoing their usual ebb and flow, there exists a few noteworthy hedge fund managers who were increasing their stakes substantially (or already accumulated large positions). 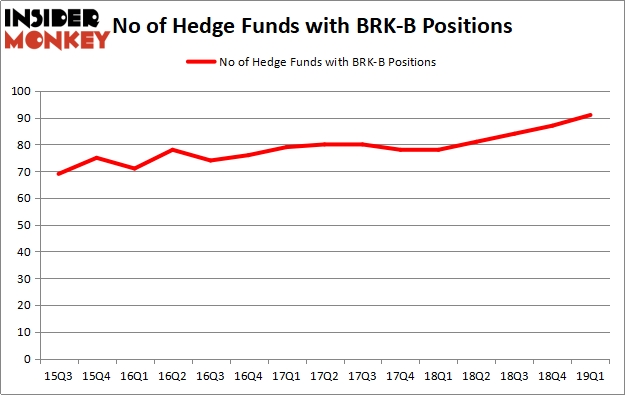 The largest stake in Berkshire Hathaway Inc. (NYSE:BRK.B) was held by Bill & Melinda Gates Foundation Trust, which reported holding $10462.1 million worth of stock at the end of March. It was followed by Eagle Capital Management with a $1854.1 million position. Other investors bullish on the company included Gardner Russo & Gardner, AQR Capital Management, and Gardner Russo & Gardner.

As industrywide interest jumped, some big names have been driving this bullishness. Renaissance Technologies, founded by Jim Simons, initiated the largest position in Berkshire Hathaway Inc. (NYSE:BRK.B). Renaissance Technologies had $268.6 million invested in the company at the end of the quarter. Adam Peterson’s Magnolia Capital Fund also made a $65.3 million investment in the stock during the quarter. The following funds were also among the new BRK-B investors: John Hempton’s Bronte Capital, Bruce Berkowitz’s Fairholme (FAIRX), and Parvinder Thiara’s Athanor Capital.

As you can see these stocks had an average of 121.5 hedge funds with bullish positions and the average amount invested in these stocks was $12828 million. That figure was $20086 million in BRK-B’s case. Facebook Inc (NASDAQ:FB) is the most popular stock in this table. On the other hand Johnson & Johnson (NYSE:JNJ) is the least popular one with only 69 bullish hedge fund positions. Berkshire Hathaway Inc. (NYSE:BRK.B) is not the least popular stock in this group but hedge fund interest is still below average. Our calculations showed that top 20 most popular stocks among hedge funds returned 1.9% in Q2 through May 30th and outperformed the S&P 500 ETF (SPY) by more than 3 percentage points. A small number of hedge funds were also right about betting on BRK-B, though not to the same extent, as the stock returned -0.6% during the same time frame and outperformed the market as well.