Hedge Funds Have Never Been This Bullish On Akero Therapeutics, Inc. (AKRO)

Akero Therapeutics, Inc. (NASDAQ:AKRO) has experienced an increase in hedge fund sentiment lately. AKRO was in 15 hedge funds’ portfolios at the end of June. There were 0 hedge funds in our database with AKRO positions at the end of the previous quarter. Our calculations also showed that AKRO isn’t among the 30 most popular stocks among hedge funds (see the video below).

In the financial world there are tons of signals stock traders have at their disposal to analyze publicly traded companies. Some of the most under-the-radar signals are hedge fund and insider trading interest. We have shown that, historically, those who follow the top picks of the top investment managers can outclass the market by a solid amount (see the details here). 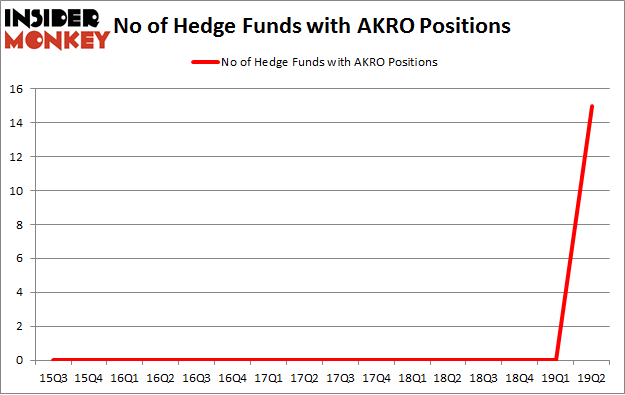 As you can see these stocks had an average of 8.75 hedge funds with bullish positions and the average amount invested in these stocks was $42 million. That figure was $75 million in AKRO’s case. Puma Biotechnology Inc (NASDAQ:PBYI) is the most popular stock in this table. On the other hand Century Bancorp, Inc. (NASDAQ:CNBKA) is the least popular one with only 3 bullish hedge fund positions. Akero Therapeutics, Inc. (NASDAQ:AKRO) is not the most popular stock in this group but hedge fund interest is still above average. Our calculations showed that top 20 most popular stocks among hedge funds returned 24.4% in 2019 through September 30th and outperformed the S&P 500 ETF (SPY) by 4 percentage points. Hedge funds were also right about betting on AKRO as the stock returned 18.8% during the third quarter and outperformed the market. Hedge funds were rewarded for their relative bullishness.