Our extensive research has shown that imitating the smart money can generate significant returns for retail investors, which is why we track nearly 750 active prominent money managers and analyze their quarterly 13F filings. The stocks that are heavily bought by hedge funds historically outperformed the market, though there is no shortage of high profile failures like hedge funds’ 2018 losses in Facebook and Apple. Let’s take a closer look at what the funds we track think about The Wendy’s Company (NASDAQ:WEN) in this article.

The Wendy’s Company (NASDAQ:WEN) was in 27 hedge funds’ portfolios at the end of March. WEN investors should pay attention to an increase in hedge fund interest lately. There were 26 hedge funds in our database with WEN holdings at the end of the previous quarter. Our calculations also showed that wen isn’t among the 30 most popular stocks among hedge funds.

Let’s take a look at the key hedge fund action regarding The Wendy’s Company (NASDAQ:WEN).

What have hedge funds been doing with The Wendy’s Company (NASDAQ:WEN)? 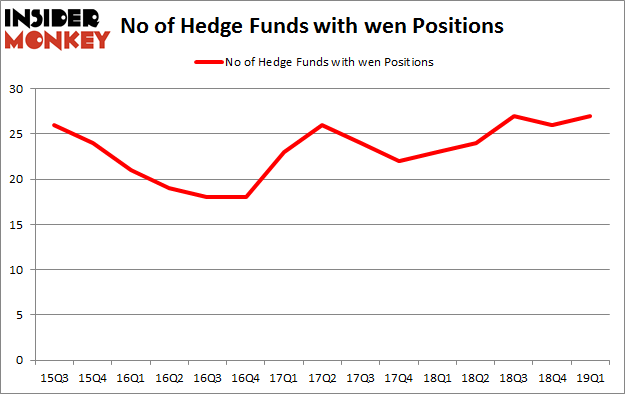 Among these funds, Trian Partners held the most valuable stake in The Wendy’s Company (NASDAQ:WEN), which was worth $512.2 million at the end of the first quarter. On the second spot was Millennium Management which amassed $61.1 million worth of shares. Moreover, Horizon Asset Management, Two Sigma Advisors, and Marshall Wace LLP were also bullish on The Wendy’s Company (NASDAQ:WEN), allocating a large percentage of their portfolios to this stock.

Now, key money managers have jumped into The Wendy’s Company (NASDAQ:WEN) headfirst. Suvretta Capital Management, managed by Aaron Cowen, assembled the most outsized position in The Wendy’s Company (NASDAQ:WEN). Suvretta Capital Management had $39.8 million invested in the company at the end of the quarter. Louis Bacon’s Moore Global Investments also initiated a $13.4 million position during the quarter. The other funds with new positions in the stock are Leon Shaulov’s Maplelane Capital, Lee Ainslie’s Maverick Capital, and Matthew Hulsizer’s PEAK6 Capital Management.

Let’s go over hedge fund activity in other stocks – not necessarily in the same industry as The Wendy’s Company (NASDAQ:WEN) but similarly valued. We will take a look at Jabil Inc. (NYSE:JBL), Emcor Group Inc (NYSE:EME), Rayonier Inc. (NYSE:RYN), and Eastgroup Properties Inc (NYSE:EGP). This group of stocks’ market values are closest to WEN’s market value.

As you can see these stocks had an average of 16.75 hedge funds with bullish positions and the average amount invested in these stocks was $218 million. That figure was $914 million in WEN’s case. Emcor Group Inc (NYSE:EME) is the most popular stock in this table. On the other hand Eastgroup Properties Inc (NYSE:EGP) is the least popular one with only 7 bullish hedge fund positions. Compared to these stocks The Wendy’s Company (NASDAQ:WEN) is more popular among hedge funds. Our calculations showed that top 20 most popular stocks among hedge funds returned 1.9% in Q2 through May 30th and outperformed the S&P 500 ETF (SPY) by more than 3 percentage points. Hedge funds were also right about betting on WEN as the stock returned 3% during the same period and outperformed the market by an even larger margin. Hedge funds were clearly right about piling into this stock relative to other stocks with similar market capitalizations.