Is The Wendy’s Company (WEN) A Good Stock To Buy?

We at Insider Monkey have gone over 700 13F filings that hedge funds and prominent investors are required to file by the SEC The 13F filings show the funds’ and investors’ portfolio positions as of December 31st. In this article, we look at what those funds think of The Wendy’s Company (NASDAQ:WEN) based on that data.

Is The Wendy’s Company (NASDAQ:WEN) ready to rally soon? The best stock pickers are becoming less hopeful. The number of bullish hedge fund positions retreated by 1 recently. Our calculations also showed that WEN isn’t among the 30 most popular stocks among hedge funds. WEN was in 26 hedge funds’ portfolios at the end of the fourth quarter of 2018. There were 27 hedge funds in our database with WEN positions at the end of the previous quarter.

At the end of the fourth quarter, a total of 26 of the hedge funds tracked by Insider Monkey were bullish on this stock, a change of -4% from the previous quarter. By comparison, 23 hedge funds held shares or bullish call options in WEN a year ago. With hedge funds’ capital changing hands, there exists a few noteworthy hedge fund managers who were increasing their stakes significantly (or already accumulated large positions). 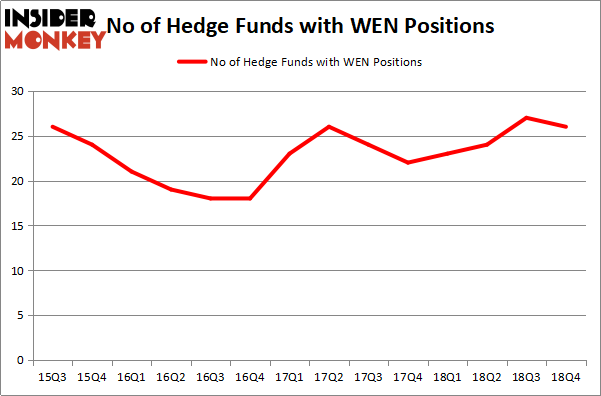 More specifically, Trian Partners was the largest shareholder of The Wendy’s Company (NASDAQ:WEN), with a stake worth $493.8 million reported as of the end of September. Trailing Trian Partners was Eminence Capital, which amassed a stake valued at $125 million. Marshall Wace LLP, Millennium Management, and Horizon Asset Management were also very fond of the stock, giving the stock large weights in their portfolios.

Seeing as The Wendy’s Company (NASDAQ:WEN) has faced a decline in interest from the aggregate hedge fund industry, logic holds that there was a specific group of money managers that slashed their full holdings last quarter. At the top of the heap, Gabriel Plotkin’s Melvin Capital Management sold off the largest stake of the 700 funds watched by Insider Monkey, totaling about $30.9 million in stock. Leon Shaulov’s fund, Maplelane Capital, also said goodbye to its stock, about $13.7 million worth. These transactions are interesting, as total hedge fund interest dropped by 1 funds last quarter.

As you can see these stocks had an average of 22 hedge funds with bullish positions and the average amount invested in these stocks was $238 million. That figure was $965 million in WEN’s case. Skechers USA Inc (NYSE:SKX) is the most popular stock in this table. On the other hand MSA Safety Incorporated (NYSE:MSA) is the least popular one with only 17 bullish hedge fund positions. Compared to these stocks The Wendy’s Company (NASDAQ:WEN) is more popular among hedge funds. Our calculations showed that top 15 most popular stocks) among hedge funds returned 24.2% through April 22nd and outperformed the S&P 500 ETF (SPY) by more than 7 percentage points. Hedge funds were also right about betting on WEN, though not to the same extent, as the stock returned 20.4% and outperformed the market as well.