At Insider Monkey, we pore over the filings of nearly 750 top investment firms every quarter, a process we have now completed for the latest reporting period. The data we’ve gathered as a result gives us access to a wealth of collective knowledge based on these firms’ portfolio holdings as of June 28. In this article, we will use that wealth of knowledge to determine whether or not Rigel Pharmaceuticals, Inc. (NASDAQ:RIGL) makes for a good investment right now.

Is Rigel Pharmaceuticals, Inc. (NASDAQ:RIGL) a sound investment right now? The smart money is getting less optimistic. The number of bullish hedge fund bets went down by 1 in recent months. Our calculations also showed that RIGL isn’t among the 30 most popular stocks among hedge funds (see the video below). RIGL was in 14 hedge funds’ portfolios at the end of June. There were 15 hedge funds in our database with RIGL holdings at the end of the previous quarter. 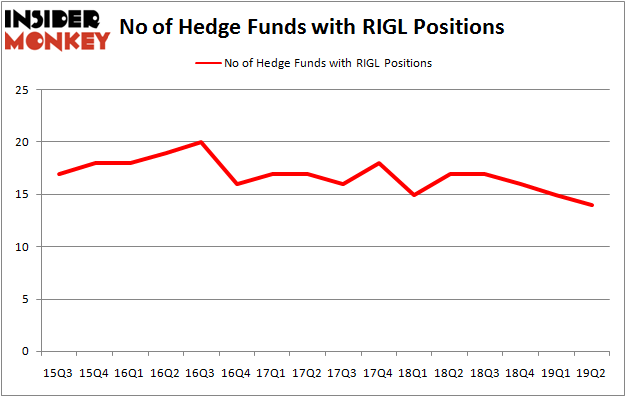 Unlike other investors who track every movement of the 25 largest hedge funds, our long-short investment strategy relies on hedge fund buy/sell signals given by the 100 best performing hedge funds. Let’s take a look at the fresh hedge fund action encompassing Rigel Pharmaceuticals, Inc. (NASDAQ:RIGL).

At the end of the second quarter, a total of 14 of the hedge funds tracked by Insider Monkey held long positions in this stock, a change of -7% from one quarter earlier. On the other hand, there were a total of 17 hedge funds with a bullish position in RIGL a year ago. With hedgies’ capital changing hands, there exists a select group of key hedge fund managers who were upping their stakes substantially (or already accumulated large positions).

According to Insider Monkey’s hedge fund database, Israel Englander’s Millennium Management has the most valuable position in Rigel Pharmaceuticals, Inc. (NASDAQ:RIGL), worth close to $17.6 million, amounting to less than 0.1%% of its total 13F portfolio. Coming in second is Tamarack Capital Management, managed by Justin John Ferayorni, which holds a $14 million position; 4.3% of its 13F portfolio is allocated to the stock. Some other members of the smart money with similar optimism consist of Ken Griffin’s Citadel Investment Group, Kris Jenner, Gordon Bussard, Graham McPhail’s Rock Springs Capital Management and William Leland Edwards’s Palo Alto Investors.

Because Rigel Pharmaceuticals, Inc. (NASDAQ:RIGL) has experienced falling interest from the entirety of the hedge funds we track, logic holds that there were a few fund managers that slashed their positions entirely in the second quarter. It’s worth mentioning that Michael Castor’s Sio Capital dropped the biggest position of all the hedgies tracked by Insider Monkey, totaling about $4.1 million in stock. Andrew Feldstein and Stephen Siderow’s fund, Blue Mountain Capital, also said goodbye to its stock, about $0.7 million worth. These bearish behaviors are important to note, as total hedge fund interest was cut by 1 funds in the second quarter.

As you can see these stocks had an average of 9 hedge funds with bullish positions and the average amount invested in these stocks was $16 million. That figure was $77 million in RIGL’s case. SpartanNash Company (NASDAQ:SPTN) is the most popular stock in this table. On the other hand Capital City Bank Group, Inc. (NASDAQ:CCBG) is the least popular one with only 3 bullish hedge fund positions. Rigel Pharmaceuticals, Inc. (NASDAQ:RIGL) is not the most popular stock in this group but hedge fund interest is still above average. This is a slightly positive signal but we’d rather spend our time researching stocks that hedge funds are piling on. Our calculations showed that top 20 most popular stocks among hedge funds returned 24.4% in 2019 through September 30th and outperformed the S&P 500 ETF (SPY) by 4 percentage points. Unfortunately RIGL wasn’t nearly as popular as these 20 stocks and hedge funds that were betting on RIGL were disappointed as the stock returned -28.4% during the third quarter and underperformed the market. If you are interested in investing in large cap stocks with huge upside potential, you should check out the top 20 most popular stocks among hedge funds as many of these stocks already outperformed the market so far this year.