After several tireless days we have finished crunching the numbers from nearly 750 13F filings issued by the elite hedge funds and other investment firms that we track at Insider Monkey, which disclosed those firms’ equity portfolios as of June 28. The results of that effort will be put on display in this article, as we share valuable insight into the smart money sentiment towards Synovus Financial Corp. (NYSE:SNV).

Is Synovus Financial Corp. (NYSE:SNV) worth your attention right now? Investors who are in the know are becoming less hopeful. The number of long hedge fund bets were cut by 5 recently. Our calculations also showed that SNV isn’t among the 30 most popular stocks among hedge funds. SNV was in 36 hedge funds’ portfolios at the end of the second quarter of 2019. There were 41 hedge funds in our database with SNV holdings at the end of the previous quarter.

Unlike some fund managers who are betting on Dow reaching 40000 in a year, our long-short investment strategy doesn’t rely on bull markets to deliver double digit returns. We only rely on hedge fund buy/sell signals. Let’s take a glance at the latest hedge fund action encompassing Synovus Financial Corp. (NYSE:SNV).

At the end of the second quarter, a total of 36 of the hedge funds tracked by Insider Monkey were bullish on this stock, a change of -12% from the first quarter of 2019. By comparison, 29 hedge funds held shares or bullish call options in SNV a year ago. With the smart money’s positions undergoing their usual ebb and flow, there exists a few key hedge fund managers who were upping their holdings substantially (or already accumulated large positions). 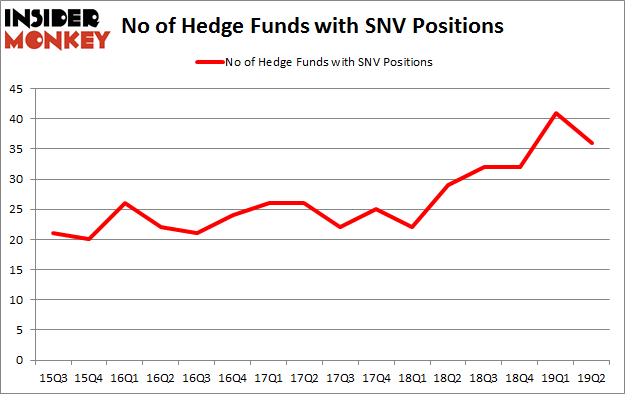 The largest stake in Synovus Financial Corp. (NYSE:SNV) was held by Citadel Investment Group, which reported holding $119 million worth of stock at the end of March. It was followed by Millennium Management with a $70.6 million position. Other investors bullish on the company included Two Sigma Advisors, Azora Capital, and EJF Capital.

Because Synovus Financial Corp. (NYSE:SNV) has witnessed bearish sentiment from the aggregate hedge fund industry, it’s easy to see that there is a sect of hedge funds that decided to sell off their full holdings in the second quarter. At the top of the heap, Louis Bacon’s Moore Global Investments cut the largest position of all the hedgies followed by Insider Monkey, comprising about $27.5 million in stock. Mariko Gordon’s fund, Daruma Asset Management, also said goodbye to its stock, about $27.3 million worth. These transactions are important to note, as aggregate hedge fund interest was cut by 5 funds in the second quarter.

As you can see these stocks had an average of 19 hedge funds with bullish positions and the average amount invested in these stocks was $254 million. That figure was $704 million in SNV’s case. Helmerich & Payne, Inc. (NYSE:HP) is the most popular stock in this table. On the other hand PLDT Inc. (NYSE:PHI) is the least popular one with only 5 bullish hedge fund positions. Compared to these stocks Synovus Financial Corp. (NYSE:SNV) is more popular among hedge funds. Our calculations showed that top 20 most popular stocks (view the video below) among hedge funds returned 24.4% in 2019 through September 30th and outperformed the S&P 500 ETF (SPY) by 4 percentage points. Hedge funds were also right about betting on SNV, though not to the same extent, as the stock returned 3% during the third quarter and outperformed the market as well.