Hedge Funds Have Never Been This Bullish On Synovus Financial Corp. (SNV)

Synovus Financial Corp. (NYSE:SNV) was in 41 hedge funds’ portfolios at the end of the first quarter of 2019. SNV has experienced an increase in enthusiasm from smart money lately. There were 32 hedge funds in our database with SNV holdings at the end of the previous quarter. Our calculations also showed that snv isn’t among the 30 most popular stocks among hedge funds. 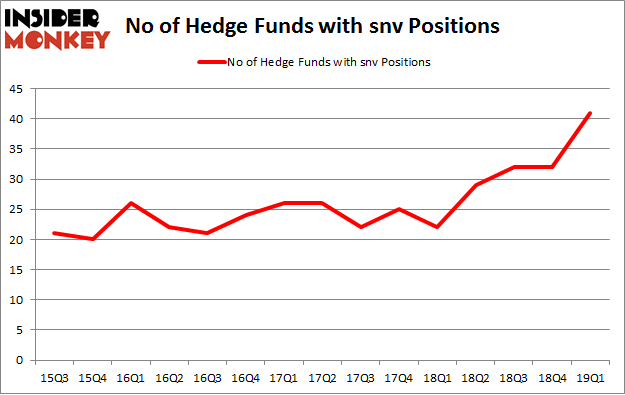 Among these funds, Citadel Investment Group held the most valuable stake in Synovus Financial Corp. (NYSE:SNV), which was worth $165.7 million at the end of the first quarter. On the second spot was Millennium Management which amassed $124.2 million worth of shares. Moreover, Two Sigma Advisors, EJF Capital, and Azora Capital were also bullish on Synovus Financial Corp. (NYSE:SNV), allocating a large percentage of their portfolios to this stock.

As one would reasonably expect, key hedge funds have been driving this bullishness. Alyeska Investment Group, managed by Anand Parekh, assembled the most valuable position in Synovus Financial Corp. (NYSE:SNV). Alyeska Investment Group had $32.7 million invested in the company at the end of the quarter. Louis Bacon’s Moore Global Investments also made a $27.5 million investment in the stock during the quarter. The other funds with brand new SNV positions are Mariko Gordon’s Daruma Asset Management, Mario Gabelli’s GAMCO Investors, and Paul Magidson, Jonathan Cohen. And Ostrom Enders’s Castine Capital Management.

As you can see these stocks had an average of 20 hedge funds with bullish positions and the average amount invested in these stocks was $389 million. That figure was $828 million in SNV’s case. The New York Times Company (NYSE:NYT) is the most popular stock in this table. On the other hand Compania Cervecerias Unidas S.A. (NYSE:CCU) is the least popular one with only 11 bullish hedge fund positions. Compared to these stocks Synovus Financial Corp. (NYSE:SNV) is more popular among hedge funds. Our calculations showed that top 20 most popular stocks among hedge funds returned 1.9% in Q2 through May 30th and outperformed the S&P 500 ETF (SPY) by more than 3 percentage points. Unfortunately SNV wasn’t nearly as popular as these 20 stocks and hedge funds that were betting on SNV were disappointed as the stock returned -3.8% during the same period and underperformed the market. If you are interested in investing in large cap stocks with huge upside potential, you should check out the top 20 most popular stocks among hedge funds as 13 of these stocks already outperformed the market in Q2.