There are several ways to beat the market, and investing in small cap stocks has historically been one of them. We like to improve the odds of beating the market further by examining what famous hedge fund operators such as Carl Icahn and George Soros think. Those hedge fund operators make billions of dollars each year by hiring the best and the brightest to do research on stocks, including small cap stocks that big brokerage houses simply don’t cover. Because of Carl Icahn and other elite funds’ exemplary historical records, we pay attention to their small cap picks. In this article, we use hedge fund filing data to analyze Synovus Financial Corp. (NYSE:SNV).

Is Synovus Financial Corp. (NYSE:SNV) the right pick for your portfolio? Money managers are getting more bullish. The number of bullish hedge fund positions advanced by 3 lately. Our calculations also showed that SNV isn’t among the 30 most popular stocks among hedge funds. 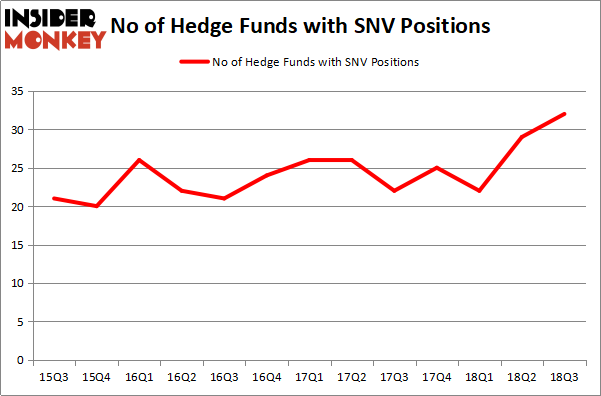 More specifically, Millennium Management was the largest shareholder of Synovus Financial Corp. (NYSE:SNV), with a stake worth $180 million reported as of the end of September. Trailing Millennium Management was Citadel Investment Group, which amassed a stake valued at $82.6 million. AQR Capital Management, Marshall Wace LLP, and EJF Capital were also very fond of the stock, giving the stock large weights in their portfolios.

As aggregate interest increased, some big names were leading the bulls’ herd. Point72 Asset Management, managed by Steve Cohen, established the biggest position in Synovus Financial Corp. (NYSE:SNV). Point72 Asset Management had $13.8 million invested in the company at the end of the quarter. Sander Gerber’s Hudson Bay Capital Management also made a $9.8 million investment in the stock during the quarter. The other funds with new positions in the stock are David Costen Haley’s HBK Investments, Matthew Tewksbury’s Stevens Capital Management, and Phill Gross and Robert Atchinson’s Adage Capital Management.

As you can see these stocks had an average of 14.75 hedge funds with bullish positions and the average amount invested in these stocks was $322 million. That figure was $754 million in SNV’s case. New Relic Inc (NYSE:NEWR) is the most popular stock in this table. On the other hand 0 is the least popular one with only 1 bullish hedge fund positions. Compared to these stocks Synovus Financial Corp. (NYSE:SNV) is more popular among hedge funds. Considering that hedge funds are fond of this stock in relation to its market cap peers, it may be a good idea to analyze it in detail and potentially include it in your portfolio.