The 700+ hedge funds and famous money managers tracked by Insider Monkey have already compiled and submitted their 13F filings for the second quarter, which unveil their equity positions as of June 28. We went through these filings, fixed typos and other more significant errors and identified the changes in hedge fund portfolios. Our extensive review of these public filings is finally over, so this article is set to reveal the smart money sentiment towards DXC Technology Company (NYSE:DXC).

Is DXC Technology Company (NYSE:DXC) undervalued? Money managers are getting less optimistic. The number of long hedge fund bets were cut by 5 lately. Our calculations also showed that DXC isn’t among the 30 most popular stocks among hedge funds. DXC was in 41 hedge funds’ portfolios at the end of the second quarter of 2019. There were 46 hedge funds in our database with DXC holdings at the end of the previous quarter.

Unlike this former hedge fund manager who is convinced Dow will soar past 40000, our long-short investment strategy doesn’t rely on bull markets to deliver double digit returns. We only rely on hedge fund buy/sell signals. Let’s take a look at the new hedge fund action surrounding DXC Technology Company (NYSE:DXC).

At the end of the second quarter, a total of 41 of the hedge funds tracked by Insider Monkey were bullish on this stock, a change of -11% from the first quarter of 2019. By comparison, 56 hedge funds held shares or bullish call options in DXC a year ago. With hedge funds’ capital changing hands, there exists an “upper tier” of notable hedge fund managers who were upping their holdings substantially (or already accumulated large positions). 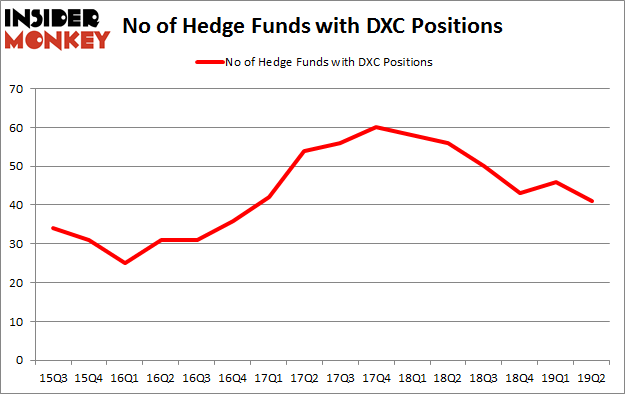 According to Insider Monkey’s hedge fund database, Larry Robbins’s Glenview Capital has the biggest position in DXC Technology Company (NYSE:DXC), worth close to $603.3 million, accounting for 5.5% of its total 13F portfolio. The second most bullish fund manager is Maverick Capital, led by Lee Ainslie, holding a $400.1 million position; the fund has 5.8% of its 13F portfolio invested in the stock. Some other peers that hold long positions comprise D. E. Shaw’s D E Shaw, Cliff Asness’s AQR Capital Management and Paul Singer’s Elliott Management.

Since DXC Technology Company (NYSE:DXC) has faced declining sentiment from hedge fund managers, logic holds that there lies a certain “tier” of hedgies that decided to sell off their full holdings in the second quarter. Intriguingly, Ryan Frick and Oliver Evans’s Dorsal Capital Management dumped the largest position of the “upper crust” of funds followed by Insider Monkey, valued at about $102.9 million in stock, and Jeffrey Talpins’s Element Capital Management was right behind this move, as the fund dropped about $30.3 million worth. These moves are interesting, as aggregate hedge fund interest was cut by 5 funds in the second quarter.

As you can see these stocks had an average of 24.75 hedge funds with bullish positions and the average amount invested in these stocks was $829 million. That figure was $2116 million in DXC’s case. Dover Corporation (NYSE:DOV) is the most popular stock in this table. On the other hand Gartner Inc (NYSE:IT) is the least popular one with only 17 bullish hedge fund positions. Compared to these stocks DXC Technology Company (NYSE:DXC) is more popular among hedge funds. Our calculations showed that top 20 most popular stocks among hedge funds returned 24.4% in 2019 through September 30th and outperformed the S&P 500 ETF (SPY) by 4 percentage points. Unfortunately DXC wasn’t nearly as popular as these 20 stocks and hedge funds that were betting on DXC were disappointed as the stock returned -46.2% during the third quarter and underperformed the market. If you are interested in investing in large cap stocks with huge upside potential, you should check out the top 20 most popular stocks (see the video below) among hedge funds as many of these stocks already outperformed the market in Q3.