We know that hedge funds generate strong, risk-adjusted returns over the long run, therefore imitating the picks that they are collectively bullish on can be a profitable strategy for retail investors. With billions of dollars in assets, smart money investors have to conduct complex analyses, spend many resources and use tools that are not always available for the general crowd. This doesn’t mean that they don’t have occasional colossal losses; they do (like Peltz’s recent General Electric losses). However, it is still a good idea to keep an eye on hedge fund activity. With this in mind, as the current round of 13F filings has just ended, let’s examine the smart money sentiment towards Builders FirstSource, Inc. (NASDAQ:BLDR).

Builders FirstSource, Inc. (NASDAQ:BLDR) investors should be aware of a decrease in support from the world’s most elite money managers recently. Our calculations also showed that BLDR isn’t among the 30 most popular stocks among hedge funds (see the video below). However, overall hedge fund sentiment is still extremely bullish.

In the 21st century investor’s toolkit there are several methods investors employ to grade their stock investments. A pair of the less utilized methods are hedge fund and insider trading sentiment. Our experts have shown that, historically, those who follow the best picks of the elite investment managers can outperform their index-focused peers by a solid margin (see the details here).

Unlike former hedge manager, Dr. Steve Sjuggerud, who is convinced Dow will soar past 40000, our long-short investment strategy doesn’t rely on bull markets to deliver double digit returns. We only rely on hedge fund buy/sell signals. We’re going to take a look at the latest hedge fund action regarding Builders FirstSource, Inc. (NASDAQ:BLDR).

What have hedge funds been doing with Builders FirstSource, Inc. (NASDAQ:BLDR)?

At the end of the second quarter, a total of 35 of the hedge funds tracked by Insider Monkey held long positions in this stock, a change of -5% from one quarter earlier. By comparison, 34 hedge funds held shares or bullish call options in BLDR a year ago. With hedge funds’ sentiment swirling, there exists an “upper tier” of key hedge fund managers who were boosting their stakes substantially (or already accumulated large positions). 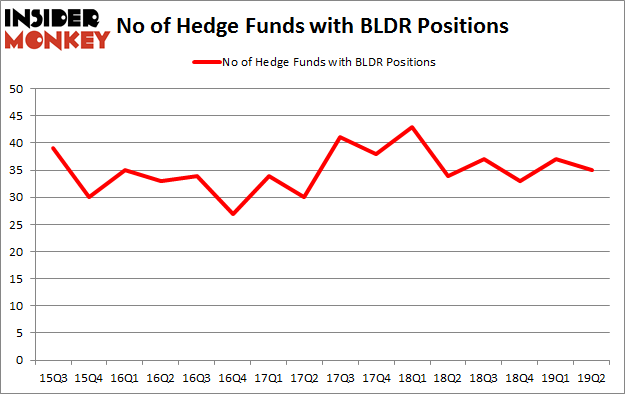 More specifically, Stadium Capital Management was the largest shareholder of Builders FirstSource, Inc. (NASDAQ:BLDR), with a stake worth $94.6 million reported as of the end of March. Trailing Stadium Capital Management was Soapstone Capital, which amassed a stake valued at $41.3 million. BeaconLight Capital, GLG Partners, and Renaissance Technologies were also very fond of the stock, giving the stock large weights in their portfolios.

Due to the fact that Builders FirstSource, Inc. (NASDAQ:BLDR) has experienced a decline in interest from the entirety of the hedge funds we track, logic holds that there were a few money managers that elected to cut their full holdings heading into Q3. At the top of the heap, Phill Gross and Robert Atchinson’s Adage Capital Management dumped the largest position of the 750 funds watched by Insider Monkey, valued at close to $10.7 million in stock, and Clint Carlson’s Carlson Capital was right behind this move, as the fund sold off about $4.4 million worth. These moves are interesting, as total hedge fund interest was cut by 2 funds heading into Q3.

Let’s now take a look at hedge fund activity in other stocks – not necessarily in the same industry as Builders FirstSource, Inc. (NASDAQ:BLDR) but similarly valued. These stocks are BrightView Holdings, Inc. (NYSE:BV), Oceaneering International, Inc. (NYSE:OII), Tellurian Inc. (NASDAQ:TELL), and eHealth, Inc. (NASDAQ:EHTH). All of these stocks’ market caps are similar to BLDR’s market cap.

As you can see these stocks had an average of 14.5 hedge funds with bullish positions and the average amount invested in these stocks was $270 million. That figure was $418 million in BLDR’s case. eHealth, Inc. (NASDAQ:EHTH) is the most popular stock in this table. On the other hand BrightView Holdings, Inc. (NYSE:BV) is the least popular one with only 8 bullish hedge fund positions. Compared to these stocks Builders FirstSource, Inc. (NASDAQ:BLDR) is more popular among hedge funds. Our calculations showed that top 20 most popular stocks among hedge funds returned 24.4% in 2019 through September 30th and outperformed the S&P 500 ETF (SPY) by 4 percentage points. Hedge funds were also right about betting on BLDR as the stock returned 22.1% during Q3 and outperformed the market by an even larger margin. Hedge funds were clearly right about piling into this stock relative to other stocks with similar market capitalizations.