Is Builders FirstSource, Inc. (BLDR) A Good Stock To Buy?

How do you pick the next stock to invest in? One way would be to spend hours of research browsing through thousands of publicly traded companies. However, an easier way is to look at the stocks that smart money investors are collectively bullish on. Hedge funds and other institutional investors usually invest large amounts of capital and have to conduct due diligence while choosing their next pick. They don’t always get it right, but, on average, their stock picks historically generated strong returns after adjusting for known risk factors. With this in mind, let’s take a look at the recent hedge fund activity surrounding Builders FirstSource, Inc. (NASDAQ:BLDR).

Is Builders FirstSource, Inc. (NASDAQ:BLDR) undervalued? The smart money is getting more bullish. The number of long hedge fund positions went up by 3 in recent months. Our calculations also showed that BLDR isn’t among the 30 most popular stocks among hedge funds. BLDR was in 37 hedge funds’ portfolios at the end of September. There were 34 hedge funds in our database with BLDR holdings at the end of the previous quarter.

At the moment there are several methods stock market investors put to use to analyze stocks. Some of the less utilized methods are hedge fund and insider trading sentiment. We have shown that, historically, those who follow the best picks of the top investment managers can outclass the S&P 500 by a significant amount (see the details here).

What have hedge funds been doing with Builders FirstSource, Inc. (NASDAQ:BLDR)? 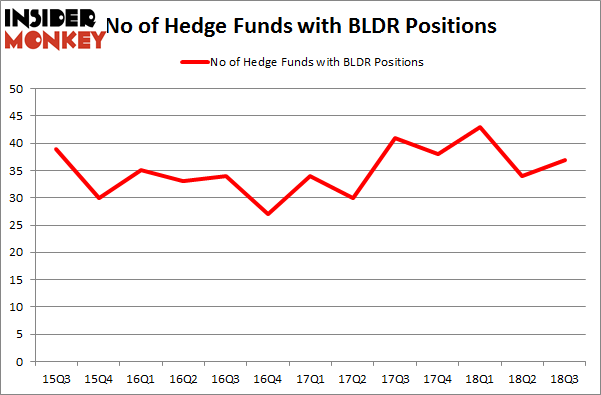 As industrywide interest jumped, specific money managers have been driving this bullishness. Marshall Wace LLP, managed by Paul Marshall and Ian Wace, established the most outsized position in Builders FirstSource, Inc. (NASDAQ:BLDR). Marshall Wace LLP had $9.7 million invested in the company at the end of the quarter. Clint Carlson’s Carlson Capital also made a $8.9 million investment in the stock during the quarter. The following funds were also among the new BLDR investors: Quincy Lee’s Ancient Art (Teton Capital), Jim Simons’s Renaissance Technologies, and Robert Rodriguez and Steven Romick’s First Pacific Advisors LLC.

As you can see these stocks had an average of 13 hedge funds with bullish positions and the average amount invested in these stocks was $88 million. That figure was $407 million in BLDR’s case. Everbridge, Inc. (NASDAQ:EVBG) is the most popular stock in this table. On the other hand FS Investment Corporation (NYSE:FSIC) is the least popular one with only 9 bullish hedge fund positions. Compared to these stocks Builders FirstSource, Inc. (NASDAQ:BLDR) is more popular among hedge funds. Considering that hedge funds are fond of this stock in relation to its market cap peers, it may be a good idea to analyze it in detail and potentially include it in your portfolio.