It was a rough fourth quarter for many hedge funds, which were naturally unable to overcome the big dip in the broad market, as the S&P 500 fell by about 4.8% during 2018 and average hedge fund losing about 1%. The Russell 2000, composed of smaller companies, performed even worse, trailing the S&P by more than 6 percentage points, as investors fled less-known quantities for safe havens. Luckily hedge funds were shifting their holdings into large-cap stocks. The 20 most popular hedge fund stocks actually generated an average return of 24.4% during the first 9 months of 2019 and outperformed the S&P 500 ETF by 4 percentage points. We are done processing the latest 13f filings and in this article we will study how hedge fund sentiment towards Accuray Incorporated (NASDAQ:ARAY) changed during the first quarter.

Accuray Incorporated (NASDAQ:ARAY) investors should be aware of an increase in support from the world’s most elite money managers lately. Our calculations also showed that ARAY isn’t among the 30 most popular stocks among hedge funds (see the video below).

In addition to following the biggest hedge funds for investment ideas, we also share stock pitches from conferences, investor letters and other sources  like this one where the fund manager is talking about two under the radar 1000% return potential stocks: first one in internet infrastructure and the second in the heart of advertising market. We use hedge fund buy/sell signals to determine whether to conduct in-depth analysis of these stock ideas which take days. We’re going to take a look at the key hedge fund action regarding Accuray Incorporated (NASDAQ:ARAY).

What have hedge funds been doing with Accuray Incorporated (NASDAQ:ARAY)?

At the end of the second quarter, a total of 17 of the hedge funds tracked by Insider Monkey held long positions in this stock, a change of 13% from one quarter earlier. The graph below displays the number of hedge funds with bullish position in ARAY over the last 16 quarters. So, let’s find out which hedge funds were among the top holders of the stock and which hedge funds were making big moves. 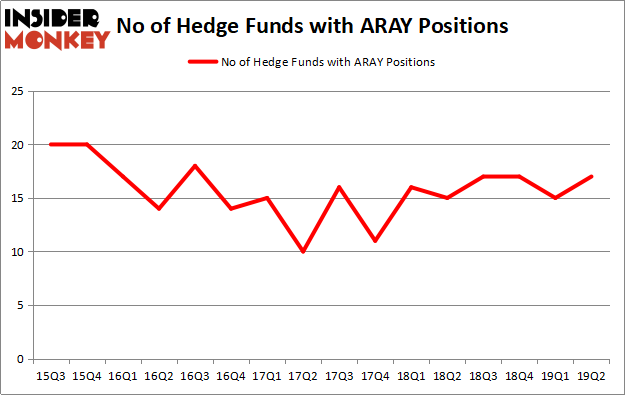 Among these funds, Renaissance Technologies held the most valuable stake in Accuray Incorporated (NASDAQ:ARAY), which was worth $19.7 million at the end of the second quarter. On the second spot was Archon Capital Management which amassed $15.1 million worth of shares. Moreover, D E Shaw, Royce & Associates, and Millennium Management were also bullish on Accuray Incorporated (NASDAQ:ARAY), allocating a large percentage of their portfolios to this stock.

As one would reasonably expect, some big names were leading the bulls’ herd. DAFNA Capital Management, managed by Nathan Fischel, initiated the largest position in Accuray Incorporated (NASDAQ:ARAY). DAFNA Capital Management had $2 million invested in the company at the end of the quarter. Noam Gottesman’s GLG Partners also initiated a $0.2 million position during the quarter. The only other fund with a new position in the stock is Gavin Saitowitz and Cisco J. del Valle’s Springbok Capital.