Hedge Funds Have Never Been This Bullish On Mastercard Incorporated (MA)

Is Mastercard Incorporated (NYSE:MA) a good stock to buy now? The best stock pickers are becoming hopeful. The number of long hedge fund bets inched up by 1 lately. Our calculations also showed that MA is among the 30 most popular stocks among hedge funds, ranking 13th. MA was in 96 hedge funds’ portfolios at the end of the fourth quarter of 2018. There were 95 hedge funds in our database with MA positions at the end of the previous quarter. Hedge fund sentiment towards Mastercard is currently at its all time high. 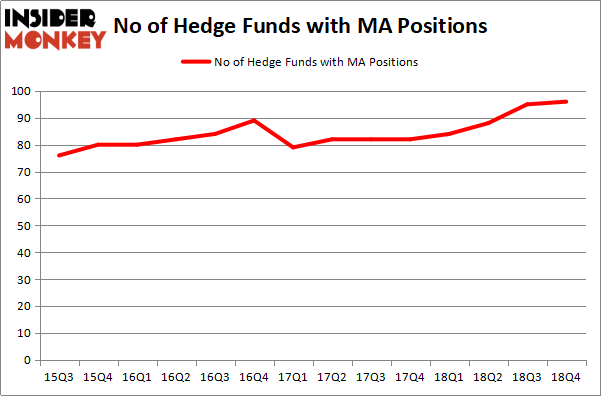 More specifically, Gardner Russo & Gardner was the largest shareholder of Mastercard Incorporated (NYSE:MA), with a stake worth $1523.9 million reported as of the end of September. Trailing Gardner Russo & Gardner was Akre Capital Management, which amassed a stake valued at $1004.9 million. Berkshire Hathaway, Arrowstreet Capital, and Lone Pine Capital were also very fond of the stock, giving the stock large weights in their portfolios.

With a general bullishness amongst the heavyweights, key money managers were leading the bulls’ herd. Lone Pine Capital, managed by Stephen Mandel, established the largest position in Mastercard Incorporated (NYSE:MA). Lone Pine Capital had $555.5 million invested in the company at the end of the quarter. Philippe Laffont’s Coatue Management also made a $119.1 million investment in the stock during the quarter. The following funds were also among the new MA investors: Brandon Haley’s Holocene Advisors, Paul Marshall and Ian Wace’s Marshall Wace LLP, and James Crichton’s Hitchwood Capital Management.

As you can see these stocks had an average of 56.25 hedge funds with bullish positions and the average amount invested in these stocks was $7412 million. That figure was $9492 million in MA’s case. Merck & Co., Inc. (NYSE:MRK) is the most popular stock in this table. On the other hand Chevron Corporation (NYSE:CVX) is the least popular one with only 48 bullish hedge fund positions. Compared to these stocks Mastercard Incorporated (NYSE:MA) is more popular among hedge funds. Our calculations showed that top 15 most popular stocks among hedge funds returned 19.7% through March 15th and outperformed the S&P 500 ETF (SPY) by 6.6 percentage points. Hedge funds were also right about betting on Mastercard as the stock returned 22.8% and outperformed the market as well.