Before we spend days researching a stock idea we’d like to take a look at how hedge funds and billionaire investors recently traded that stock. S&P 500 Index ETF (SPY) lost 8.7% through October 26th. Forty percent of the S&P 500 constituents were down more than 10%. The average return of a randomly picked stock in the index is -9.5%. This means you (or a monkey throwing a dart) have less than an even chance of beating the market by randomly picking a stock. On the other hand, the top 25 most popular S&P 500 stocks among hedge funds had an average loss of 8.8%. In this article, we will take a look at what hedge funds think about Golar LNG Limited (NASDAQ:GLNG).

Is Golar LNG Limited (NASDAQ:GLNG) a sound investment today? Money managers are taking an optimistic view. The number of bullish hedge fund positions moved up by 2 in recent months. Our calculations also showed that glng isn’t among the 30 most popular stocks among hedge funds. GLNG was in 34 hedge funds’ portfolios at the end of September. There were 32 hedge funds in our database with GLNG holdings at the end of the previous quarter.

What does the smart money think about Golar LNG Limited (NASDAQ:GLNG)? 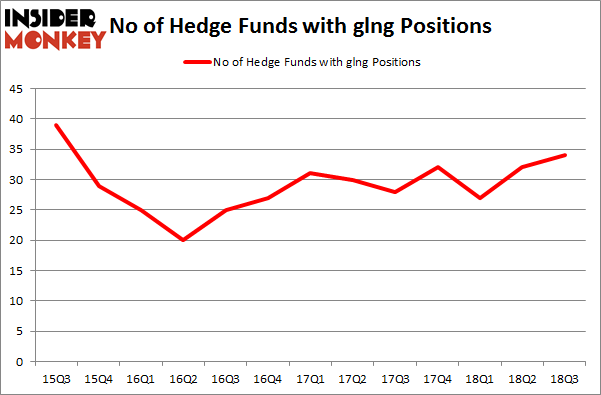 According to publicly available hedge fund and institutional investor holdings data compiled by Insider Monkey, William B. Gray’s Orbis Investment Management has the most valuable position in Golar LNG Limited (NASDAQ:GLNG), worth close to $162.6 million, amounting to 0.9% of its total 13F portfolio. On Orbis Investment Management’s heels is Blue Mountain Capital, led by Andrew Feldstein and Stephen Siderow, holding a $57.8 million position; the fund has 1% of its 13F portfolio invested in the stock. Some other members of the smart money that are bullish contain Christian Leone’s Luxor Capital Group, Ross Turner’s Pelham Capital and Christian Leone’s Luxor Capital Group.

As you can see these stocks had an average of 12.75 hedge funds with bullish positions and the average amount invested in these stocks was $80 million. That figure was $652 million in GLNG’s case. Korn/Ferry International (NYSE:KFY) is the most popular stock in this table. On the other hand Grupo Aeroportuario del Centro Nort (NASDAQ:OMAB) is the least popular one with only 5 bullish hedge fund positions. Compared to these stocks Golar LNG Limited (NASDAQ:GLNG) is more popular among hedge funds. Considering that hedge funds are fond of this stock in relation to its market cap peers, it may be a good idea to analyze it in detail and potentially include it in your portfolio.