Like everyone else, elite investors make mistakes. Some of their top consensus picks, such as Amazon, Facebook and Alibaba, have not done well in Q4 due to various reasons. Nevertheless, the data show elite investors’ consensus picks have done well on average over the long-term. The top 15 S&P 500 stocks among hedge funds at the end of September 2018 returned an average of 1% through March 15th whereas the S&P 500 Index ETF lost 2.2% during the same period. Because their consensus picks have done well, we pay attention to what elite funds think before doing extensive research on a stock. In this article, we take a closer look at Advance Auto Parts, Inc. (NYSE:AAP) from the perspective of those elite funds.

Advance Auto Parts, Inc. (NYSE:AAP) was in 51 hedge funds’ portfolios at the end of December. AAP investors should be aware of an increase in hedge fund interest in recent months. There were 38 hedge funds in our database with AAP positions at the end of the previous quarter. Our calculations also showed that AAP isn’t among the 30 most popular stocks among hedge funds.

In the eyes of most market participants, hedge funds are assumed to be slow, outdated financial tools of yesteryear. While there are over 8000 funds trading at the moment, We hone in on the moguls of this club, approximately 750 funds. These investment experts handle the lion’s share of the smart money’s total capital, and by paying attention to their first-class equity investments, Insider Monkey has brought to light a few investment strategies that have historically beaten the broader indices. Insider Monkey’s flagship hedge fund strategy outperformed the S&P 500 index by nearly 5 percentage points annually since its inception in May 2014 through early November 2018. We were able to generate large returns even by identifying short candidates. Our portfolio of short stocks lost 27.5% since February 2017 (through March 12th) even though the market was up nearly 25% during the same period. We just shared a list of 6 short targets in our latest quarterly update and they are already down an average of 6% in less than a month. 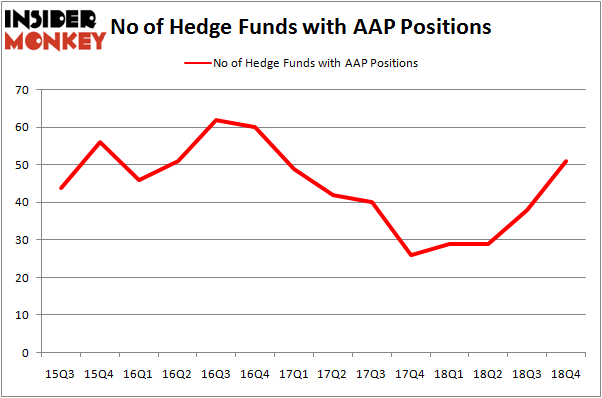 According to Insider Monkey’s hedge fund database, Jeffrey Smith’s Starboard Value LP has the number one position in Advance Auto Parts, Inc. (NYSE:AAP), worth close to $499.9 million, accounting for 15.4% of its total 13F portfolio. Coming in second is Ken Griffin of Citadel Investment Group, with a $215.4 million position; the fund has 0.1% of its 13F portfolio invested in the stock. Some other hedge funds and institutional investors that are bullish contain Israel Englander’s Millennium Management, John Overdeck and David Siegel’s Two Sigma Advisors and Karthik Sarma’s SRS Investment Management.

As one would reasonably expect, specific money managers were leading the bulls’ herd. Renaissance Technologies, managed by Jim Simons, established the most outsized position in Advance Auto Parts, Inc. (NYSE:AAP). Renaissance Technologies had $47.9 million invested in the company at the end of the quarter. Gregory Thomas’s Carbonado Capital also made a $11.8 million investment in the stock during the quarter. The other funds with brand new AAP positions are Richard Scott Greeder’s Broad Bay Capital, Peter Muller’s PDT Partners, and Steven Boyd’s Armistice Capital.

As you can see these stocks had an average of 32.5 hedge funds with bullish positions and the average amount invested in these stocks was $1244 million. That figure was $1909 million in AAP’s case. Godaddy Inc (NYSE:GDDY) is the most popular stock in this table. On the other hand Extra Space Storage, Inc. (NYSE:EXR) is the least popular one with only 24 bullish hedge fund positions. Compared to these stocks Advance Auto Parts, Inc. (NYSE:AAP) is more popular among hedge funds. Our calculations showed that top 15 most popular stocks among hedge funds returned 21.3% through April 8th and outperformed the S&P 500 ETF (SPY) by more than 5 percentage points. Unfortunately AAP wasn’t in this group. Hedge funds that bet on AAP were disappointed as the stock returned 12.8% and underperformed the market. If you are interested in investing in large cap stocks, you should check out the top 15 hedge fund stocks as 12 of these outperformed the market. Disclosure: None. This article was originally published at Insider Monkey.