Is T-Mobile US, Inc. (NASDAQ:TMUS) a good stock to buy right now? We at Insider Monkey like to examine what billionaires and hedge funds think of a company before spending days of research on it. Given their 2 and 20 payment structure, hedge funds have more incentives and resources than the average investor. The funds have access to expert networks and get tips from industry insiders. They also have numerous Ivy League graduates and MBAs. Like everyone else, hedge funds perform miserably at times, but their consensus picks have historically outperformed the market after risk adjustments.

T-Mobile US, Inc. (NASDAQ:TMUS) was in 78 hedge funds’ portfolios at the end of the second quarter of 2019. TMUS has experienced an increase in enthusiasm from smart money of late. There were 62 hedge funds in our database with TMUS positions at the end of the previous quarter. Our calculations also showed that TMUS ranked 23rd among the 30 most popular stocks among hedge funds.

Unlike some fund managers who are betting on Dow reaching 40000 in a year, our long-short investment strategy doesn’t rely on bull markets to deliver double digit returns. We only rely on hedge fund buy/sell signals. Let’s take a glance at the latest hedge fund action encompassing T-Mobile US, Inc. (NASDAQ:TMUS).

How have hedgies been trading T-Mobile US, Inc. (NASDAQ:TMUS)? 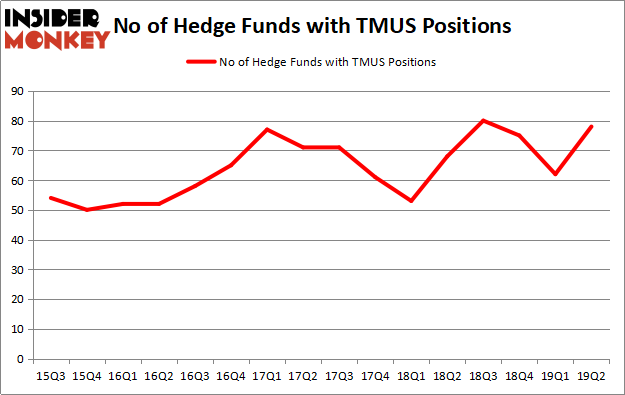 More specifically, Citadel Investment Group was the largest shareholder of T-Mobile US, Inc. (NASDAQ:TMUS), with a stake worth $308 million reported as of the end of March. Trailing Citadel Investment Group was Maverick Capital, which amassed a stake valued at $283.1 million. D E Shaw, Paulson & Co, and Arrowstreet Capital were also very fond of the stock, giving the stock large weights in their portfolios.

As industrywide interest jumped, key hedge funds were leading the bulls’ herd. Glenview Capital, managed by Larry Robbins, established the biggest position in T-Mobile US, Inc. (NASDAQ:TMUS). Glenview Capital had $88.4 million invested in the company at the end of the quarter. Clint Carlson’s Carlson Capital also initiated a $57.5 million position during the quarter. The other funds with new positions in the stock are Farallon Capital, Carl Tiedemann and Michael Tiedemann’s TIG Advisors, and Phill Gross and Robert Atchinson’s Adage Capital Management.

Let’s go over hedge fund activity in other stocks similar to T-Mobile US, Inc. (NASDAQ:TMUS). We will take a look at The TJX Companies, Inc. (NYSE:TJX), Enterprise Products Partners L.P. (NYSE:EPD), CSX Corporation (NASDAQ:CSX), and PNC Financial Services Group Inc. (NYSE:PNC). All of these stocks’ market caps are closest to TMUS’s market cap.

As you can see these stocks had an average of 38.25 hedge funds with bullish positions and the average amount invested in these stocks was $2551 million. That figure was $2626 million in TMUS’s case. The TJX Companies, Inc. (NYSE:TJX) is the most popular stock in this table. On the other hand Enterprise Products Partners L.P. (NYSE:EPD) is the least popular one with only 19 bullish hedge fund positions. Compared to these stocks T-Mobile US, Inc. (NASDAQ:TMUS) is more popular among hedge funds. Our calculations showed that top 20 most popular stocks among hedge funds returned 24.4% in 2019 through September 30th and outperformed the S&P 500 ETF (SPY) by 4 percentage points. Hedge funds were also right about betting on TMUS as the stock returned 6.2% during Q3 and outperformed the market by an even larger margin. Hedge funds were clearly right about piling into this stock relative to other stocks with similar market capitalizations.