Did Hedge Funds Drop The Ball On Heska Corp (HSKA) ?

Is Heska Corp (NASDAQ:HSKA) a good equity to bet on right now? We like to check what the smart money thinks first before doing extensive research on a given stock. Although there have been several high profile failed hedge fund picks, the consensus picks among hedge fund investors have historically outperformed the market after adjusting for known risk attributes. It’s not surprising given that hedge funds have access to better information and more resources to predict the winners in the stock market.

Heska Corp (NASDAQ:HSKA) shareholders have witnessed a decrease in support from the world’s most elite money managers in recent months. HSKA was in 12 hedge funds’ portfolios at the end of September. There were 13 hedge funds in our database with HSKA positions at the end of the previous quarter. Our calculations also showed that HSKA isn’t among the 30 most popular stocks among hedge funds (click for Q3 rankings and see the video below for Q2 rankings).

We leave no stone unturned when looking for the next great investment idea. For example Discover is offering this insane cashback card, so we look into shorting the stock. One of the most bullish analysts in America just put his money where his mouth is. He says, “I’m investing more today than I did back in early 2009.” So we check out his pitch. We read hedge fund investor letters and listen to stock pitches at hedge fund conferences. We even check out this option genius’ weekly trade ideas. This December we recommended Adams Energy  based on an under-the-radar fund manager’s investor letter and the stock gained 20 percent. Let’s take a look at the fresh hedge fund action encompassing Heska Corp (NASDAQ:HSKA).

What does smart money think about Heska Corp (NASDAQ:HSKA)?

At the end of the third quarter, a total of 12 of the hedge funds tracked by Insider Monkey held long positions in this stock, a change of -8% from the previous quarter. On the other hand, there were a total of 10 hedge funds with a bullish position in HSKA a year ago. With the smart money’s sentiment swirling, there exists a select group of key hedge fund managers who were upping their holdings considerably (or already accumulated large positions). 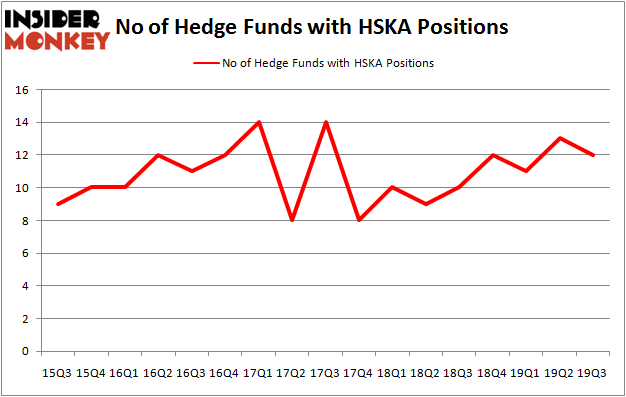 When looking at the institutional investors followed by Insider Monkey, Brian Bares, Russell Mollen, and James Bradshaw’s Nine Ten Partners has the number one position in Heska Corp (NASDAQ:HSKA), worth close to $21.2 million, accounting for 6.7% of its total 13F portfolio. Sitting at the No. 2 spot is SG Capital Management, managed by Ken Grossman and Glen Schneider, which holds a $20.2 million position; the fund has 3.8% of its 13F portfolio invested in the stock. Other professional money managers with similar optimism encompass Kamran Moghtaderi’s Eversept Partners, Mario Gabelli’s GAMCO Investors and Ken Griffin’s Citadel Investment Group. In terms of the portfolio weights assigned to each position Nine Ten Partners allocated the biggest weight to Heska Corp (NASDAQ:HSKA), around 6.7% of its 13F portfolio. SG Capital Management is also relatively very bullish on the stock, dishing out 3.82 percent of its 13F equity portfolio to HSKA.

Because Heska Corp (NASDAQ:HSKA) has witnessed falling interest from the aggregate hedge fund industry, we can see that there is a sect of hedgies who sold off their entire stakes heading into Q4. At the top of the heap, Israel Englander’s Millennium Management cut the biggest stake of all the hedgies tracked by Insider Monkey, comprising about $17.7 million in stock, and Phill Gross and Robert Atchinson’s Adage Capital Management was right behind this move, as the fund sold off about $3.8 million worth. These moves are important to note, as aggregate hedge fund interest was cut by 1 funds heading into Q4.

Let’s check out hedge fund activity in other stocks – not necessarily in the same industry as Heska Corp (NASDAQ:HSKA) but similarly valued. We will take a look at Axcelis Technologies Inc (NASDAQ:ACLS), Morphic Holding, Inc. (NASDAQ:MORF), AudioCodes Ltd. (NASDAQ:AUDC), and EverQuote, Inc. (NASDAQ:EVER). This group of stocks’ market valuations are closest to HSKA’s market valuation.

As you can see these stocks had an average of 11 hedge funds with bullish positions and the average amount invested in these stocks was $56 million. That figure was $51 million in HSKA’s case. Axcelis Technologies Inc (NASDAQ:ACLS) is the most popular stock in this table. On the other hand Morphic Holding, Inc. (NASDAQ:MORF) is the least popular one with only 3 bullish hedge fund positions. Heska Corp (NASDAQ:HSKA) is not the most popular stock in this group but hedge fund interest is still above average. Our calculations showed that top 20 most popular stocks among hedge funds returned 37.4% in 2019 through the end of November and outperformed the S&P 500 ETF (SPY) by 9.9 percentage points. Hedge funds were also right about betting on HSKA as the stock returned 34.8% during the fourth quarter (through the end of November) and outperformed the market. Hedge funds were rewarded for their relative bullishness.