Did Hedge Funds Drop The Ball On Helen of Troy Limited (HELE) ?

Is Helen of Troy Limited (NASDAQ:HELE) a good place to invest some of your money right now? We can gain invaluable insight to help us answer that question by studying the investment trends of top investors, who employ world-class Ivy League graduates, who are given immense resources and industry contacts to put their financial expertise to work. The top picks of these firms have historically outperformed the market when we account for known risk factors, making them very valuable investment ideas.

Helen of Troy Limited (NASDAQ:HELE) was in 20 hedge funds’ portfolios at the end of the second quarter of 2019. HELE has seen a decrease in hedge fund sentiment of late. There were 21 hedge funds in our database with HELE holdings at the end of the previous quarter. Our calculations also showed that HELE isn’t among the 30 most popular stocks among hedge funds (view the video below).

Unlike former hedge manager, Dr. Steve Sjuggerud, who is convinced Dow will soar past 40000, our long-short investment strategy doesn’t rely on bull markets to deliver double digit returns. We only rely on hedge fund buy/sell signals. Let’s take a peek at the latest hedge fund action regarding Helen of Troy Limited (NASDAQ:HELE). 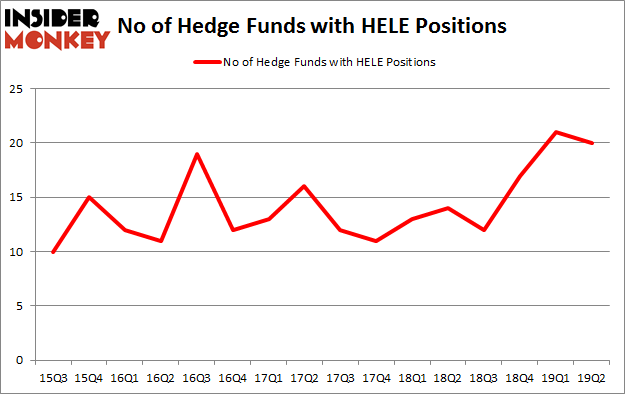 Of the funds tracked by Insider Monkey, Fisher Asset Management, managed by Ken Fisher, holds the number one position in Helen of Troy Limited (NASDAQ:HELE). Fisher Asset Management has a $82.5 million position in the stock, comprising 0.1% of its 13F portfolio. On Fisher Asset Management’s heels is Arrowstreet Capital, led by Peter Rathjens, Bruce Clarke and John Campbell, holding a $24.7 million position; the fund has 0.1% of its 13F portfolio invested in the stock. Remaining professional money managers that are bullish consist of Renaissance Technologies, Noam Gottesman’s GLG Partners and Israel Englander’s Millennium Management.

Because Helen of Troy Limited (NASDAQ:HELE) has experienced falling interest from the entirety of the hedge funds we track, we can see that there is a sect of hedgies that decided to sell off their full holdings by the end of the second quarter. It’s worth mentioning that Lee Ainslie’s Maverick Capital cut the largest investment of the “upper crust” of funds tracked by Insider Monkey, worth an estimated $1.6 million in stock, and Steve Cohen’s Point72 Asset Management was right behind this move, as the fund dumped about $1.5 million worth. These moves are interesting, as aggregate hedge fund interest fell by 1 funds by the end of the second quarter.

As you can see these stocks had an average of 19.25 hedge funds with bullish positions and the average amount invested in these stocks was $368 million. That figure was $153 million in HELE’s case. Global Blood Therapeutics Inc (NASDAQ:GBT) is the most popular stock in this table. On the other hand Paramount Group Inc (NYSE:PGRE) is the least popular one with only 13 bullish hedge fund positions. Helen of Troy Limited (NASDAQ:HELE) is not the most popular stock in this group but hedge fund interest is still above average. Our calculations showed that top 20 most popular stocks among hedge funds returned 24.4% in 2019 through September 30th and outperformed the S&P 500 ETF (SPY) by 4 percentage points. Hedge funds were also right about betting on HELE as the stock returned 20.7% during the third quarter and outperformed the market. Hedge funds were rewarded for their relative bullishness.