The Insider Monkey team has completed processing the quarterly 13F filings for the June quarter submitted by the hedge funds and other money managers included in our extensive database. Most hedge fund investors experienced strong gains on the back of a strong market performance, which certainly propelled them to adjust their equity holdings so as to maintain the desired risk profile. As a result, the relevancy of these public filings and their content is indisputable, as they may reveal numerous high-potential stocks. The following article will discuss the smart money sentiment towards Federal Signal Corporation (NYSE:FSS).

Hedge fund interest in Federal Signal Corporation (NYSE:FSS) shares was flat at the end of last quarter. This is usually a negative indicator. The level and the change in hedge fund popularity aren’t the only variables you need to analyze to decipher hedge funds’ perspectives. A stock may witness a boost in popularity but it may still be less popular than similarly priced stocks. That’s why at the end of this article we will examine companies such as CSG Systems International, Inc. (NASDAQ:CSGS), CorVel Corporation (NASDAQ:CRVL), and Apellis Pharmaceuticals, Inc. (NASDAQ:APLS) to gather more data points. Our calculations also showed that FSS isn’t among the 30 most popular stocks among hedge funds (see the video below).

If you’d ask most shareholders, hedge funds are seen as slow, old investment vehicles of yesteryear. While there are greater than 8000 funds in operation at the moment, We choose to focus on the elite of this group, about 750 funds. It is estimated that this group of investors preside over the majority of all hedge funds’ total capital, and by observing their best stock picks, Insider Monkey has identified a few investment strategies that have historically surpassed the S&P 500 index. Insider Monkey’s flagship hedge fund strategy outperformed the S&P 500 index by around 5 percentage points a year since its inception in May 2014. We were able to generate large returns even by identifying short candidates. Our portfolio of short stocks lost 25.7% since February 2017 (through September 30th) even though the market was up more than 33% during the same period. We just shared a list of 10 short targets in our latest quarterly update . 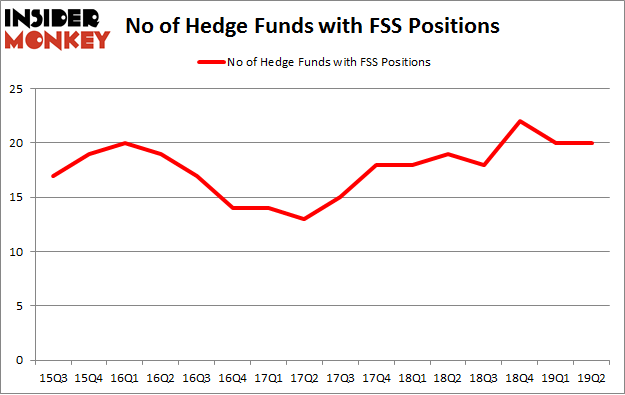 The largest stake in Federal Signal Corporation (NYSE:FSS) was held by GAMCO Investors, which reported holding $20.6 million worth of stock at the end of March. It was followed by Impax Asset Management with a $4.2 million position. Other investors bullish on the company included Renaissance Technologies, Royce & Associates, and Navellier & Associates.

Since Federal Signal Corporation (NYSE:FSS) has experienced a decline in interest from the entirety of the hedge funds we track, it’s easy to see that there exists a select few funds that elected to cut their positions entirely by the end of the second quarter. Interestingly, Israel Englander’s Millennium Management dumped the biggest stake of all the hedgies monitored by Insider Monkey, worth close to $2.9 million in stock. Andrew Feldstein and Stephen Siderow’s fund, Blue Mountain Capital, also dropped its stock, about $0.8 million worth. These bearish behaviors are important to note, as aggregate hedge fund interest stayed the same (this is a bearish signal in our experience).

As you can see these stocks had an average of 15.75 hedge funds with bullish positions and the average amount invested in these stocks was $212 million. That figure was $53 million in FSS’s case. CSG Systems International, Inc. (NASDAQ:CSGS) is the most popular stock in this table. On the other hand Evoqua Water Technologies Corp. (NYSE:AQUA) is the least popular one with only 13 bullish hedge fund positions. Compared to these stocks Federal Signal Corporation (NYSE:FSS) is more popular among hedge funds. Our calculations showed that top 20 most popular stocks among hedge funds returned 24.4% in 2019 through September 30th and outperformed the S&P 500 ETF (SPY) by 4 percentage points. Hedge funds were also right about betting on FSS as the stock returned 22.7% during Q3 and outperformed the market by an even larger margin. Hedge funds were clearly right about piling into this stock relative to other stocks with similar market capitalizations.