We know that hedge funds generate strong, risk-adjusted returns over the long run, therefore imitating the picks that they are collectively bullish on can be a profitable strategy for retail investors. With billions of dollars in assets, smart money investors have to conduct complex analyses, spend many resources and use tools that are not always available for the general crowd. This doesn’t mean that they don’t have occasional colossal losses; they do (like Peltz’s recent General Electric losses). However, it is still good idea to keep an eye on hedge fund activity. With this in mind, as the current round of 13F filings has just ended, let’s examine the smart money sentiment towards Federal Signal Corporation (NYSE:FSS).

Is Federal Signal Corporation (NYSE:FSS) a bargain? Prominent investors are turning less bullish. The number of long hedge fund positions fell by 1 recently. Our calculations also showed that FSS isn’t among the 30 most popular stocks among hedge funds. FSS was in 18 hedge funds’ portfolios at the end of September. There were 19 hedge funds in our database with FSS holdings at the end of the previous quarter.

Today there are numerous methods investors employ to assess stocks. A duo of the most useful methods are hedge fund and insider trading interest. Our researchers have shown that, historically, those who follow the best picks of the top money managers can trounce their index-focused peers by a significant amount (see the details here).

What have hedge funds been doing with Federal Signal Corporation (NYSE:FSS)? 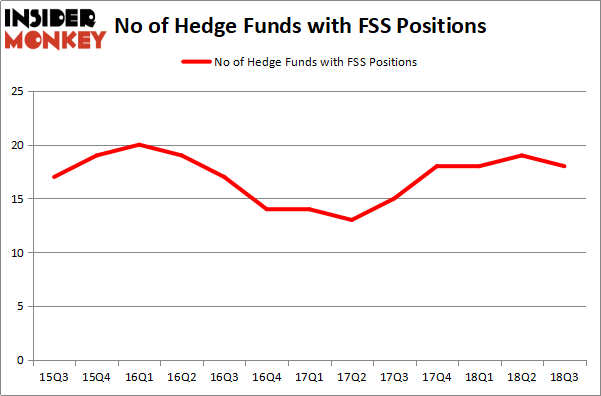 The largest stake in Federal Signal Corporation (NYSE:FSS) was held by GAMCO Investors, which reported holding $21.4 million worth of stock at the end of September. It was followed by Royce & Associates with a $19 million position. Other investors bullish on the company included Millennium Management, AlphaOne Capital Partners, and D E Shaw.

Since Federal Signal Corporation (NYSE:FSS) has faced falling interest from the smart money, logic holds that there was a specific group of fund managers that elected to cut their full holdings last quarter. It’s worth mentioning that Dmitry Balyasny’s Balyasny Asset Management dropped the largest position of the 700 funds followed by Insider Monkey, comprising an estimated $0.5 million in stock. Paul Tudor Jones’s fund, Tudor Investment Corp, also said goodbye to its stock, about $0.4 million worth. These bearish behaviors are important to note, as total hedge fund interest fell by 1 funds last quarter.

As you can see these stocks had an average of 18.25 hedge funds with bullish positions and the average amount invested in these stocks was $146 million. That figure was $95 million in FSS’s case. MicroStrategy Incorporated (NASDAQ:MSTR) is the most popular stock in this table. On the other hand Matthews International Corp (NASDAQ:MATW) is the least popular one with only 12 bullish hedge fund positions. Federal Signal Corporation (NYSE:FSS) is not the least popular stock in this group but hedge fund interest is still below average. This is a slightly negative signal and we’d rather spend our time researching stocks that hedge funds are piling on. In this regard MSTR might be a better candidate to consider a long position.