Did Hedge Funds Drop The Ball On CIGNA Corporation (CI)?

Russell 2000 ETF (IWM) lagged the larger S&P 500 ETF (SPY) by more than 10 percentage points since the end of the third quarter of 2018 as investors first worried over the possible ramifications of rising interest rates and the escalation of the trade war with China. The hedge funds and institutional investors we track typically invest more in smaller-cap stocks than an average investor (i.e. only about 60% S&P 500 constituents were among the 500 most popular stocks among hedge funds), and we have seen data that shows those funds paring back their overall exposure. Those funds cutting positions in small-caps is one reason why volatility has increased. In the following paragraphs, we take a closer look at what hedge funds and prominent investors think of CIGNA Corporation (NYSE:CI) and see how the stock is affected by the recent hedge fund activity.

Is CIGNA Corporation (NYSE:CI) undervalued? The smart money is in a bullish mood. The number of long hedge fund positions advanced by 14 in recent months. Our calculations also showed that CI isn’t among the 30 most popular stocks among hedge funds (click for Q3 rankings and see the video below for Q2 rankings).

Unlike the largest US hedge funds that are convinced Dow will soar past 40,000 or the world’s most bearish hedge fund that’s more convinced than ever that a crash is coming, our long-short investment strategy doesn’t rely on bull or bear markets to deliver double digit returns. We only rely on the best performing hedge funds‘ buy/sell signals. We’re going to take a look at the fresh hedge fund action regarding CIGNA Corporation (NYSE:CI).

Heading into the fourth quarter of 2019, a total of 62 of the hedge funds tracked by Insider Monkey were bullish on this stock, a change of 29% from the second quarter of 2019. By comparison, 60 hedge funds held shares or bullish call options in CI a year ago. With hedgies’ sentiment swirling, there exists a select group of notable hedge fund managers who were increasing their stakes considerably (or already accumulated large positions). 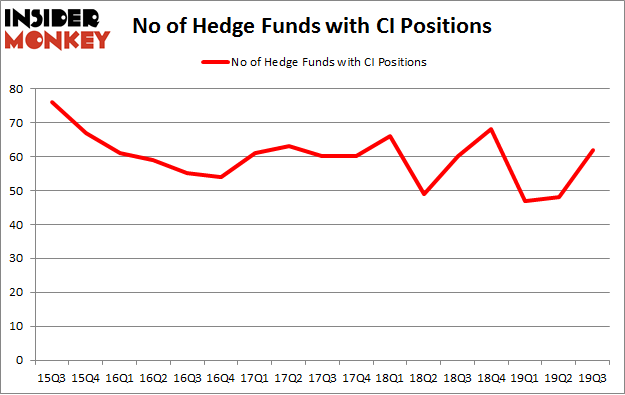 More specifically, Glenview Capital was the largest shareholder of CIGNA Corporation (NYSE:CI), with a stake worth $779 million reported as of the end of September. Trailing Glenview Capital was Kensico Capital, which amassed a stake valued at $217.1 million. Citadel Investment Group, Lakewood Capital Management, and BloombergSen were also very fond of the stock, becoming one of the largest hedge fund holders of the company. In terms of the portfolio weights assigned to each position Hawkeye Capital allocated the biggest weight to CIGNA Corporation (NYSE:CI), around 15.61% of its portfolio. BloombergSen is also relatively very bullish on the stock, dishing out 9.86 percent of its 13F equity portfolio to CI.

As one would reasonably expect, key hedge funds have jumped into CIGNA Corporation (NYSE:CI) headfirst. Eminence Capital, managed by Ricky Sandler, initiated the most outsized position in CIGNA Corporation (NYSE:CI). Eminence Capital had $161.2 million invested in the company at the end of the quarter. Jeffrey Altman’s Owl Creek Asset Management also initiated a $63.7 million position during the quarter. The other funds with new positions in the stock are Christopher James’s Partner Fund Management, Zach Schreiber’s Point State Capital, and Brian Ashford-Russell and Tim Woolley’s Polar Capital.

Let’s go over hedge fund activity in other stocks – not necessarily in the same industry as CIGNA Corporation (NYSE:CI) but similarly valued. We will take a look at Ecolab Inc. (NYSE:ECL), Boston Scientific Corporation (NYSE:BSX), Eni SpA (NYSE:E), and CSX Corporation (NASDAQ:CSX). This group of stocks’ market caps are closest to CI’s market cap.

As you can see these stocks had an average of 32.25 hedge funds with bullish positions and the average amount invested in these stocks was $2151 million. That figure was $3081 million in CI’s case. Boston Scientific Corporation (NYSE:BSX) is the most popular stock in this table. On the other hand Eni SpA (NYSE:E) is the least popular one with only 5 bullish hedge fund positions. Compared to these stocks CIGNA Corporation (NYSE:CI) is more popular among hedge funds. Our calculations showed that top 20 most popular stocks among hedge funds returned 37.4% in 2019 through the end of November and outperformed the S&P 500 ETF (SPY) by 9.9 percentage points. Hedge funds were also right about betting on CI as the stock returned 31.7% during the first two months of Q4 and outperformed the market by an even larger margin. Hedge funds were clearly right about piling into this stock relative to other stocks with similar market capitalizations.