Insider Monkey has processed numerous 13F filings of hedge funds and famous investors to create an extensive database of hedge fund holdings. The 13F filings show the hedge funds’ and investors’ positions as of the end of the fourth quarter. You can find write-ups about an individual hedge fund’s trades on numerous financial news websites. However, in this article we will take a look at their collective moves and analyze what the smart money thinks of Axon Enterprise, Inc. (NASDAQ:AAXN) based on that data.

Axon Enterprise, Inc. (NASDAQ:AAXN) shares haven’t seen a lot of action during the third quarter. Overall, hedge fund sentiment was unchanged. The stock was in 16 hedge funds’ portfolios at the end of December. At the end of this article we will also compare AAXN to other stocks including Ryder System, Inc. (NYSE:R), NuVasive, Inc. (NASDAQ:NUVA), and RH (NYSE:RH) to get a better sense of its popularity.

What does the smart money think about Axon Enterprise, Inc. (NASDAQ:AAXN)?

At Q4’s end, a total of 16 of the hedge funds tracked by Insider Monkey were long this stock, a change of 0% from the second quarter of 2018. On the other hand, there were a total of 17 hedge funds with a bullish position in AAXN a year ago. With hedge funds’ sentiment swirling, there exists a few key hedge fund managers who were adding to their holdings meaningfully (or already accumulated large positions). 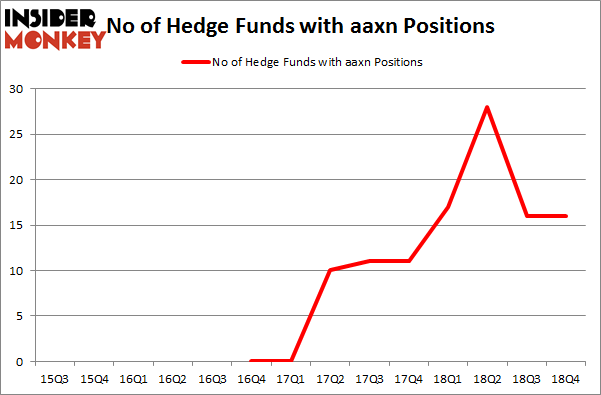 Among these funds, Abdiel Capital Advisors held the most valuable stake in Axon Enterprise, Inc. (NASDAQ:AAXN), which was worth $108.3 million at the end of the third quarter. On the second spot was Broadwood Capital which amassed $33.3 million worth of shares. Moreover, Polar Capital, Sandler Capital Management, and Citadel Investment Group were also bullish on Axon Enterprise, Inc. (NASDAQ:AAXN), allocating a large percentage of their portfolios to this stock.

Judging by the fact that Axon Enterprise, Inc. (NASDAQ:AAXN) has faced declining sentiment from the smart money, it’s easy to see that there exists a select few fund managers that slashed their entire stakes in the third quarter. At the top of the heap, Steve Cohen’s Point72 Asset Management sold off the largest position of all the hedgies watched by Insider Monkey, totaling an estimated $3.3 million in stock. Noam Gottesman’s fund, GLG Partners, also dropped its stock, about $1.7 million worth. These transactions are intriguing to say the least, as aggregate hedge fund interest stayed the same (this is a bearish signal in our experience).

As you can see these stocks had an average of 20.5 hedge funds with bullish positions and the average amount invested in these stocks was $243 million. That figure was $229 million in AAXN’s case. RH (NYSE:RH) is the most popular stock in this table. On the other hand WD-40 Company (NASDAQ:WDFC) is the least popular one with only 15 bullish hedge fund positions. Axon Enterprise, Inc. (NASDAQ:AAXN) is not the least popular stock in this group but hedge fund interest is still below average. Our calculations showed that top 15 most popular stocks) among hedge funds returned 24.2% through April 22nd and outperformed the S&P 500 ETF (SPY) by more than 7 percentage points. A small number of hedge funds were also right about betting on AAXN as the stock returned 38.8% and outperformed the market by an even larger margin.