Did Hedge Funds Drop The Ball On AtriCure Inc. (ATRC) ?

Is AtriCure Inc. (NASDAQ:ATRC) the right investment to pursue these days? Money managers are turning less bullish. The number of bullish hedge fund positions shrunk by 1 lately. Our calculations also showed that ATRC isn’t among the 30 most popular stocks among hedge funds (click for Q3 rankings and see the video below for Q2 rankings).

Unlike the largest US hedge funds that are convinced Dow will soar past 40,000 or the world’s most bearish hedge fund that’s more convinced than ever that a crash is coming, our long-short investment strategy doesn’t rely on bull or bear markets to deliver double digit returns. We only rely on the best performing hedge funds‘ buy/sell signals. We’re going to take a gander at the fresh hedge fund action surrounding AtriCure Inc. (NASDAQ:ATRC).

What have hedge funds been doing with AtriCure Inc. (NASDAQ:ATRC)?

At Q3’s end, a total of 19 of the hedge funds tracked by Insider Monkey held long positions in this stock, a change of -5% from one quarter earlier. Below, you can check out the change in hedge fund sentiment towards ATRC over the last 17 quarters. With hedgies’ positions undergoing their usual ebb and flow, there exists a select group of key hedge fund managers who were increasing their holdings significantly (or already accumulated large positions). 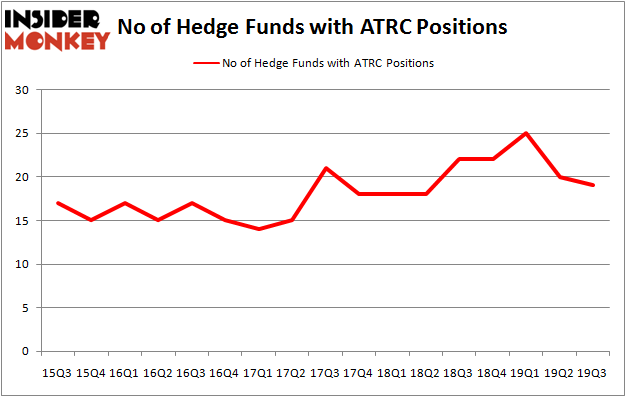 Seeing as AtriCure Inc. (NASDAQ:ATRC) has experienced declining sentiment from the aggregate hedge fund industry, it’s safe to say that there were a few funds who sold off their entire stakes in the third quarter. Intriguingly, Phill Gross and Robert Atchinson’s Adage Capital Management cut the largest position of the 750 funds tracked by Insider Monkey, worth close to $3 million in stock, and Paul Hondros’s AlphaOne Capital Partners was right behind this move, as the fund dropped about $1.4 million worth. These bearish behaviors are intriguing to say the least, as aggregate hedge fund interest was cut by 1 funds in the third quarter.

As you can see these stocks had an average of 12.5 hedge funds with bullish positions and the average amount invested in these stocks was $119 million. That figure was $88 million in ATRC’s case. Dicerna Pharmaceuticals Inc (NASDAQ:DRNA) is the most popular stock in this table. On the other hand Sapiens International Corporation N.V. (NASDAQ:SPNS) is the least popular one with only 8 bullish hedge fund positions. AtriCure Inc. (NASDAQ:ATRC) is not the most popular stock in this group but hedge fund interest is still above average. Our calculations showed that top 20 most popular stocks among hedge funds returned 37.4% in 2019 through the end of November and outperformed the S&P 500 ETF (SPY) by 9.9 percentage points. Hedge funds were also right about betting on ATRC as the stock returned 19.3% during the fourth quarter (through the end of November) and outperformed the market. Hedge funds were rewarded for their relative bullishness.