Did Hedge Funds Drop The Ball On At Home Group Inc. (HOME) ?

Is At Home Group Inc. (NYSE:HOME) a healthy stock for your portfolio? Money managers are getting less optimistic. The number of bullish hedge fund bets were cut by 17 lately. Our calculations also showed that HOME isn’t among the 30 most popular stocks among hedge funds (see the video below). HOME was in 15 hedge funds’ portfolios at the end of June. There were 32 hedge funds in our database with HOME holdings at the end of the previous quarter. 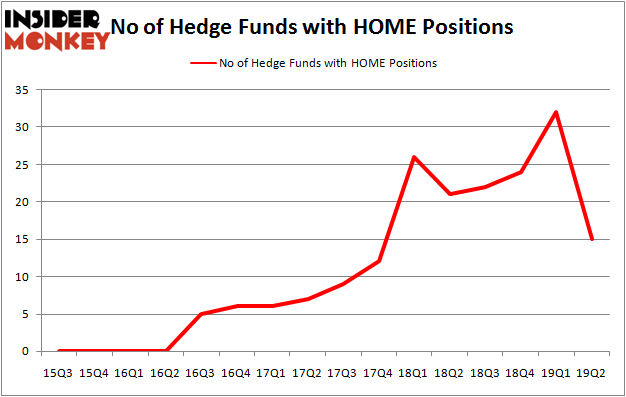 Heading into the third quarter of 2019, a total of 15 of the hedge funds tracked by Insider Monkey held long positions in this stock, a change of -53% from the first quarter of 2019. On the other hand, there were a total of 21 hedge funds with a bullish position in HOME a year ago. With hedge funds’ capital changing hands, there exists a select group of noteworthy hedge fund managers who were increasing their stakes meaningfully (or already accumulated large positions).

Seeing as At Home Group Inc. (NYSE:HOME) has witnessed bearish sentiment from the entirety of the hedge funds we track, we can see that there lies a certain “tier” of funds that decided to sell off their entire stakes in the second quarter. At the top of the heap, Mariko Gordon’s Daruma Asset Management sold off the largest stake of the “upper crust” of funds monitored by Insider Monkey, worth about $27.1 million in stock, and John Lykouretzos’s Hoplite Capital Management was right behind this move, as the fund dropped about $22.4 million worth. These transactions are interesting, as total hedge fund interest dropped by 17 funds in the second quarter.

As you can see these stocks had an average of 10.25 hedge funds with bullish positions and the average amount invested in these stocks was $111 million. That figure was $67 million in HOME’s case. BBX Capital Corporation (NYSE:BBX) is the most popular stock in this table. On the other hand CONSOL Coal Resources LP (NYSE:CCR) is the least popular one with only 4 bullish hedge fund positions. At Home Group Inc. (NYSE:HOME) is not the most popular stock in this group but hedge fund interest is still above average. Our calculations showed that top 20 most popular stocks among hedge funds returned 24.4% in 2019 through September 30th and outperformed the S&P 500 ETF (SPY) by 4 percentage points. Hedge funds were also right about betting on HOME as the stock returned 44.4% during the third quarter and outperformed the market. Hedge funds were rewarded for their relative bullishness.