The 700+ hedge funds and money managers tracked by Insider Monkey have already compiled and submitted their 13F filings for the fourth quarter, which unveil their equity positions as of December 31. We went through these filings, fixed typos and other more significant errors and identified the changes in hedge fund positions. Our extensive review of these public filings is finally over, so this article is set to reveal the smart money sentiment towards Agios Pharmaceuticals Inc (NASDAQ:AGIO).

Is Agios Pharmaceuticals Inc (NASDAQ:AGIO) a healthy stock for your portfolio? Prominent investors are taking a bearish view. The number of bullish hedge fund positions fell by 5 recently. Our calculations also showed that agio isn’t among the 30 most popular stocks among hedge funds. AGIO was in 17 hedge funds’ portfolios at the end of December. There were 22 hedge funds in our database with AGIO positions at the end of the previous quarter. 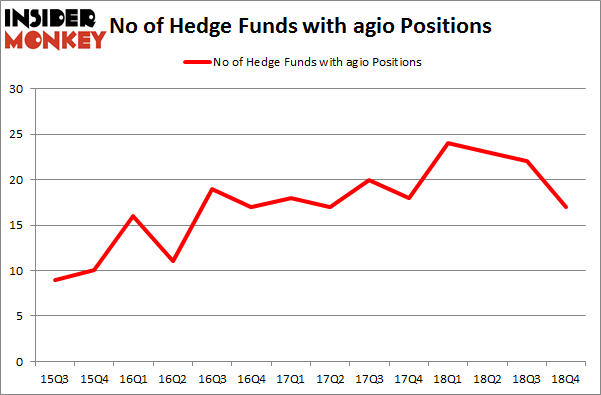 Of the funds tracked by Insider Monkey, Woodford Investment Management, managed by Neil Woodford, holds the largest position in Agios Pharmaceuticals Inc (NASDAQ:AGIO). Woodford Investment Management has a $91.2 million position in the stock, comprising 7.9% of its 13F portfolio. The second most bullish fund manager is Alkeon Capital Management, managed by Panayotis Takis Sparaggis, which holds a $20.7 million position; the fund has 0.1% of its 13F portfolio invested in the stock. Some other professional money managers with similar optimism include Eli Casdin’s Casdin Capital, Brian Ashford-Russell and Tim Woolley’s Polar Capital and D. E. Shaw’s D E Shaw.

Seeing as Agios Pharmaceuticals Inc (NASDAQ:AGIO) has experienced bearish sentiment from the aggregate hedge fund industry, logic holds that there exists a select few fund managers who sold off their positions entirely by the end of the third quarter. At the top of the heap, James E. Flynn’s Deerfield Management sold off the biggest investment of the 700 funds monitored by Insider Monkey, comprising about $26.9 million in stock, and James A. Silverman’s Opaleye Management was right behind this move, as the fund cut about $10 million worth. These bearish behaviors are interesting, as total hedge fund interest fell by 5 funds by the end of the third quarter.

As you can see these stocks had an average of 19.25 hedge funds with bullish positions and the average amount invested in these stocks was $200 million. That figure was $206 million in AGIO’s case. Delek US Holdings, Inc. (NYSE:DK) is the most popular stock in this table. On the other hand Cedar Fair, L.P. (NYSE:FUN) is the least popular one with only 10 bullish hedge fund positions. Agios Pharmaceuticals Inc (NASDAQ:AGIO) is not the least popular stock in this group but hedge fund interest is still below average. Our calculations showed that top 15 most popular stocks) among hedge funds returned 24.2% through April 22nd and outperformed the S&P 500 ETF (SPY) by more than 7 percentage points. A small number of hedge funds were also right about betting on AGIO, though not to the same extent, as the stock returned 22.8% and outperformed the market as well.