There are several ways to beat the market, and investing in small cap stocks has historically been one of them. We like to improve the odds of beating the market further by examining what famous hedge fund operators such as Jeff Ubben, George Soros and Carl Icahn think. Those hedge fund operators make billions of dollars each year by hiring the best and the brightest to do research on stocks, including small cap stocks that big brokerage houses simply don’t cover. Because of Carl Icahn and other elite funds’ exemplary historical records, we pay attention to their small cap picks. In this article, we use hedge fund filing data to analyze CF Industries Holdings, Inc. (NYSE:CF).

CF Industries Holdings, Inc. (NYSE:CF) shareholders have witnessed an increase in enthusiasm from smart money lately. Our calculations also showed that CF isn’t among the 30 most popular stocks among hedge funds (see the video below).

According to most investors, hedge funds are perceived as worthless, outdated financial vehicles of the past. While there are over 8000 funds with their doors open at present, Our experts hone in on the leaders of this club, approximately 750 funds. These money managers administer the majority of the smart money’s total asset base, and by observing their best picks, Insider Monkey has unsheathed various investment strategies that have historically outperformed the market. Insider Monkey’s flagship hedge fund strategy exceeded the S&P 500 index by around 5 percentage points a year since its inception in May 2014. We were able to generate large returns even by identifying short candidates. Our portfolio of short stocks lost 25.7% since February 2017 (through September 30th) even though the market was up more than 33% during the same period. We just shared a list of 10 short targets in our latest quarterly update .

Unlike this former hedge fund manager who is convinced Dow will soar past 40000, our long-short investment strategy doesn’t rely on bull markets to deliver double digit returns. We only rely on hedge fund buy/sell signals. We’re going to take a gander at the fresh hedge fund action surrounding CF Industries Holdings, Inc. (NYSE:CF). 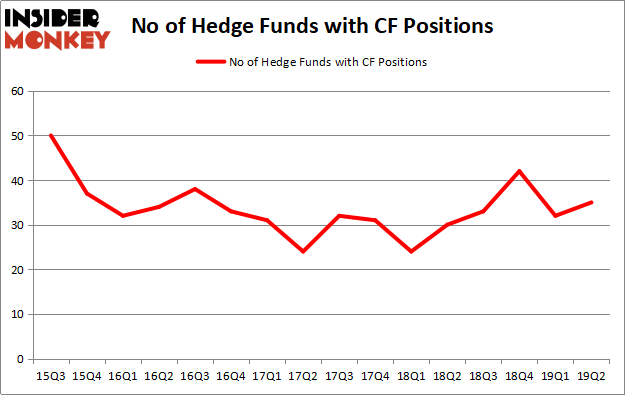 Among these funds, Eminence Capital held the most valuable stake in CF Industries Holdings, Inc. (NYSE:CF), which was worth $210.5 million at the end of the second quarter. On the second spot was Glendon Capital Management which amassed $136.9 million worth of shares. Moreover, Platinum Asset Management, Adage Capital Management, and Two Sigma Advisors were also bullish on CF Industries Holdings, Inc. (NYSE:CF), allocating a large percentage of their portfolios to this stock.

Let’s check out hedge fund activity in other stocks similar to CF Industries Holdings, Inc. (NYSE:CF). We will take a look at Everest Re Group Ltd (NYSE:RE), Avery Dennison Corporation (NYSE:AVY), Under Armour Inc (NYSE:UA), and Shaw Communications Inc (NYSE:SJR). All of these stocks’ market caps are closest to CF’s market cap.

As you can see these stocks had an average of 23.5 hedge funds with bullish positions and the average amount invested in these stocks was $559 million. That figure was $954 million in CF’s case. Under Armour Inc (NYSE:UA) is the most popular stock in this table. On the other hand Shaw Communications Inc (NYSE:SJR) is the least popular one with only 12 bullish hedge fund positions. CF Industries Holdings, Inc. (NYSE:CF) is not the most popular stock in this group but hedge fund interest is still above average. Our calculations showed that top 20 most popular stocks among hedge funds returned 24.4% in 2019 through September 30th and outperformed the S&P 500 ETF (SPY) by 4 percentage points. Hedge funds were also right about betting on CF as the stock returned 6% during the third quarter and outperformed the market. Hedge funds were rewarded for their relative bullishness.