While the market driven by short-term sentiment influenced by the accomodative interest rate environment in the US, increasing oil prices and deteriorating expectations towards the resolution of the trade war with China, many smart money investors kept their cautious approach regarding the current bull run in the third quarter and hedging or reducing many of their long positions. Some fund managers are betting on Dow hitting 40,000 to generate strong returns. However, as we know, big investors usually buy stocks with strong fundamentals that can deliver gains both in bull and bear markets, which is why we believe we can profit from imitating them. In this article, we are going to take a look at the smart money sentiment surrounding Canadian National Railway Company (NYSE:CNI) and see how the stock performed in comparison to hedge funds’ consensus picks.

Is Canadian National Railway Company (NYSE:CNI) a cheap stock to buy now? The best stock pickers are getting less optimistic. The number of bullish hedge fund bets were trimmed by 1 in recent months. Our calculations also showed that CNI isn’t among the 30 most popular stocks among hedge funds (click for Q3 rankings and see the video at the end of this article for Q2 rankings). CNI was in 27 hedge funds’ portfolios at the end of the third quarter of 2019. There were 28 hedge funds in our database with CNI positions at the end of the previous quarter.

To the average investor there are dozens of gauges stock market investors employ to size up their holdings. Some of the most useful gauges are hedge fund and insider trading indicators. Our experts have shown that, historically, those who follow the best picks of the elite investment managers can outperform the S&P 500 by a solid margin (see the details here).

We leave no stone unturned when looking for the next great investment idea. For example Europe is set to become the world’s largest cannabis market, so we check out this European marijuana stock pitch. We read hedge fund investor letters and listen to stock pitches at hedge fund conferences. This December, we recommended Adams Energy as a one-way bet based on an under-the-radar fund manager’s investor letter and the stock is still extremely cheap despite already gaining 20 percent. With all of this in mind we’re going to take a look at the latest hedge fund action surrounding Canadian National Railway Company (NYSE:CNI). 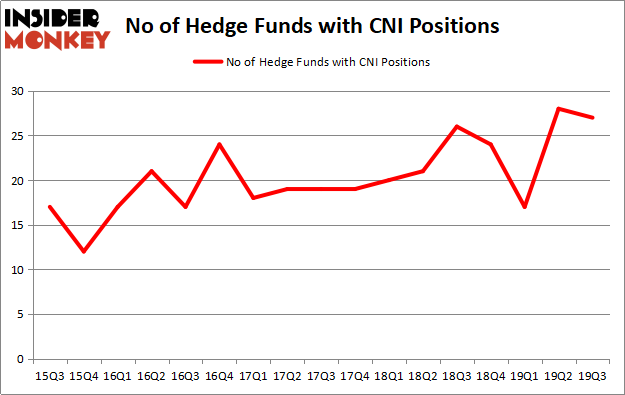 According to Insider Monkey’s hedge fund database, Bill & Melinda Gates Foundation Trust, managed by Michael Larson, holds the number one position in Canadian National Railway Company (NYSE:CNI). Bill & Melinda Gates Foundation Trust has a $1.539 billion position in the stock, comprising 7.3% of its 13F portfolio. The second most bullish fund manager is Arrowstreet Capital, led by Peter Rathjens, Bruce Clarke and John Campbell, holding a $336 million position; the fund has 0.8% of its 13F portfolio invested in the stock. Other hedge funds and institutional investors that are bullish encompass David E. Shaw’s D E Shaw, Noam Gottesman’s GLG Partners and Renaissance Technologies. In terms of the portfolio weights assigned to each position Bill & Melinda Gates Foundation Trust allocated the biggest weight to Canadian National Railway Company (NYSE:CNI), around 7.25% of its 13F portfolio. Signition LP is also relatively very bullish on the stock, designating 1.73 percent of its 13F equity portfolio to CNI.

Judging by the fact that Canadian National Railway Company (NYSE:CNI) has experienced falling interest from the smart money, we can see that there is a sect of funds that decided to sell off their positions entirely in the third quarter. Interestingly, Todd J. Kantor’s Encompass Capital Advisors dumped the biggest stake of all the hedgies followed by Insider Monkey, totaling an estimated $9.3 million in stock. Sara Nainzadeh’s fund, Centenus Global Management, also cut its stock, about $9.2 million worth. These transactions are important to note, as total hedge fund interest dropped by 1 funds in the third quarter.

Let’s now take a look at hedge fund activity in other stocks – not necessarily in the same industry as Canadian National Railway Company (NYSE:CNI) but similarly valued. These stocks are The Southern Company (NYSE:SO), Northrop Grumman Corporation (NYSE:NOC), ConocoPhillips Company (NYSE:COP), and Colgate-Palmolive Company (NYSE:CL). All of these stocks’ market caps are closest to CNI’s market cap.

As you can see these stocks had an average of 45.25 hedge funds with bullish positions and the average amount invested in these stocks was $1749 million. That figure was $2085 million in CNI’s case. ConocoPhillips Company (NYSE:COP) is the most popular stock in this table. On the other hand The Southern Company (NYSE:SO) is the least popular one with only 31 bullish hedge fund positions. Compared to these stocks Canadian National Railway Company (NYSE:CNI) is even less popular than SO. Hedge funds dodged a bullet by taking a bearish stance towards CNI. Our calculations showed that the top 20 most popular hedge fund stocks returned 41.3% in 2019 and outperformed the S&P 500 ETF (SPY) by 10.1 percentage points. Unfortunately CNI wasn’t nearly as popular as these 20 stocks (hedge fund sentiment was very bearish); CNI investors were disappointed as the stock returned 24.5% in 2019 and underperformed the market. If you are interested in investing in large cap stocks with huge upside potential, you should check out the top 20 most popular stocks among hedge funds as 65 percent of these stocks outperformed the market in 2019.