Many investors, including Paul Tudor Jones or Stan Druckenmiller, have been saying before 2018’s Q4 market crash that the stock market is overvalued due to a low interest rate environment that leads to companies swapping their equity for debt and focusing mostly on short-term performance such as beating the quarterly earnings estimates. In the first half of 2019, most investors recovered all of their Q4 losses as sentiment shifted and optimism dominated the US China trade negotiations. Nevertheless, many of the stocks that delivered strong returns in the first half still sport strong fundamentals and their gains were more related to the general market sentiment rather than their individual performance and hedge funds kept their bullish stance. In this article we will find out how hedge fund sentiment to Callon Petroleum Company (NYSE:CPE) changed recently.

Is Callon Petroleum Company (NYSE:CPE) a buy here? Money managers are becoming hopeful. The number of long hedge fund bets rose by 16 in recent months. Our calculations also showed that CPE isn’t among the 30 most popular stocks among hedge funds (click for Q3 rankings and see the video at the end of this article for Q2 rankings).

To most market participants, hedge funds are perceived as unimportant, old financial vehicles of the past. While there are over 8000 funds trading at present, We hone in on the upper echelon of this club, approximately 750 funds. Most estimates calculate that this group of people have their hands on the lion’s share of the hedge fund industry’s total asset base, and by shadowing their first-class picks, Insider Monkey has come up with numerous investment strategies that have historically outperformed the market. Insider Monkey’s flagship short hedge fund strategy outrun the S&P 500 short ETFs by around 20 percentage points annually since its inception in May 2014. Our portfolio of short stocks lost 27.8% since February 2017 (through November 21st) even though the market was up more than 39% during the same period. We just shared a list of 7 short targets in our latest quarterly update .

We leave no stone unturned when looking for the next great investment idea. For example Europe is set to become the world’s largest cannabis market, so we check out this European marijuana stock pitch. We read hedge fund investor letters and listen to stock pitches at hedge fund conferences. This December, we recommended Adams Energy as a one-way bet based on an under-the-radar fund manager’s investor letter and the stock is still extremely cheap despite already gaining 20 percent. Keeping this in mind let’s go over the latest hedge fund action encompassing Callon Petroleum Company (NYSE:CPE).

What does smart money think about Callon Petroleum Company (NYSE:CPE)?

At Q3’s end, a total of 28 of the hedge funds tracked by Insider Monkey were bullish on this stock, a change of 133% from the second quarter of 2019. By comparison, 26 hedge funds held shares or bullish call options in CPE a year ago. With hedgies’ positions undergoing their usual ebb and flow, there exists a select group of notable hedge fund managers who were increasing their stakes considerably (or already accumulated large positions). 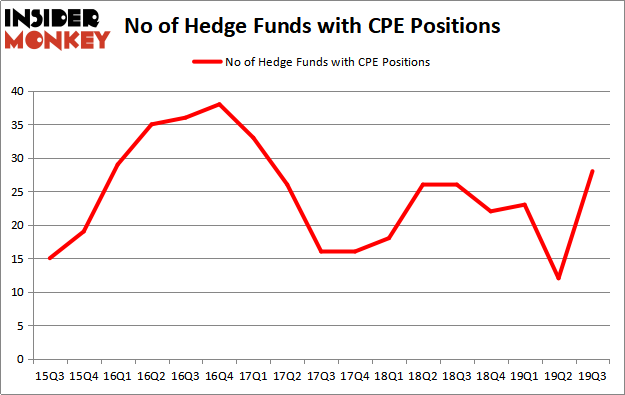 Among these funds, Paulson & Co held the most valuable stake in Callon Petroleum Company (NYSE:CPE), which was worth $93.7 million at the end of the third quarter. On the second spot was AQR Capital Management which amassed $56.9 million worth of shares. Luminus Management, Deep Basin Capital, and Fisher Asset Management were also very fond of the stock, becoming one of the largest hedge fund holders of the company. In terms of the portfolio weights assigned to each position Farmstead Capital Management allocated the biggest weight to Callon Petroleum Company (NYSE:CPE), around 5.44% of its 13F portfolio. Deep Basin Capital is also relatively very bullish on the stock, designating 2.42 percent of its 13F equity portfolio to CPE.

Consequently, key money managers were breaking ground themselves. Paulson & Co, managed by John Paulson, established the most outsized position in Callon Petroleum Company (NYSE:CPE). Paulson & Co had $93.7 million invested in the company at the end of the quarter. Matt Smith’s Deep Basin Capital also made a $30.6 million investment in the stock during the quarter. The other funds with brand new CPE positions are Gavin Saitowitz and Cisco J. del Valle’s Springbok Capital, Carl Tiedemann and Michael Tiedemann’s TIG Advisors, and Clint Carlson’s Carlson Capital.

As you can see these stocks had an average of 12.75 hedge funds with bullish positions and the average amount invested in these stocks was $74 million. That figure was $383 million in CPE’s case. AtriCure Inc. (NASDAQ:ATRC) is the most popular stock in this table. On the other hand Fitbit Inc (NYSE:FIT) is the least popular one with only 9 bullish hedge fund positions. Compared to these stocks Callon Petroleum Company (NYSE:CPE) is more popular among hedge funds. Our calculations showed that top 20 most popular stocks among hedge funds returned 41.3% in 2019 and outperformed the S&P 500 ETF (SPY) by 10.1 percentage points. Unfortunately CPE wasn’t nearly as popular as these 20 stocks and hedge funds that were betting on CPE were disappointed as the stock returned -25.6% in 2019 and trailed the market. If you are interested in investing in large cap stocks with huge upside potential, you should check out the top 20 most popular stocks among hedge funds as 65 percent of these stocks outperformed the market in 2019.