Like everyone else, elite investors make mistakes. Some of their top consensus picks, such as Amazon, Facebook and Alibaba, have not done well in Q4 due to various reasons. Nevertheless, the data show elite investors’ consensus picks have done well on average over the long-term. The top 20 stocks among hedge funds beat the S&P 500 Index ETF by 4 percentage points so far this year. Because their consensus picks have done well, we pay attention to what elite funds think before doing extensive research on a stock. In this article, we take a closer look at NuVasive, Inc. (NASDAQ:NUVA) from the perspective of those elite funds.

NuVasive, Inc. (NASDAQ:NUVA) was in 24 hedge funds’ portfolios at the end of June. NUVA has experienced an increase in hedge fund sentiment recently. There were 20 hedge funds in our database with NUVA holdings at the end of the previous quarter. Our calculations also showed that NUVA isn’t among the 30 most popular stocks among hedge funds (view video below). 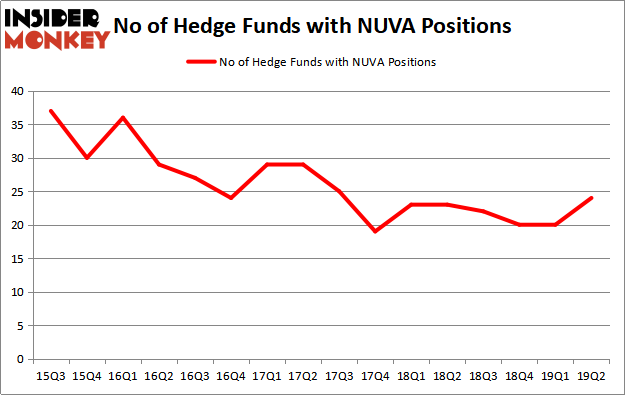 According to Insider Monkey’s hedge fund database, Eminence Capital, managed by Ricky Sandler, holds the number one position in NuVasive, Inc. (NASDAQ:NUVA). Eminence Capital has a $70.2 million position in the stock, comprising 0.9% of its 13F portfolio. Sitting at the No. 2 spot is Ken Fisher of Fisher Asset Management, with a $66.7 million position; 0.1% of its 13F portfolio is allocated to the company. Other professional money managers with similar optimism encompass Cliff Asness’s AQR Capital Management, Noam Gottesman’s GLG Partners and James Dinan’s York Capital Management.

Consequently, specific money managers were leading the bulls’ herd. Eminence Capital, managed by Ricky Sandler, created the most valuable position in NuVasive, Inc. (NASDAQ:NUVA). Eminence Capital had $70.2 million invested in the company at the end of the quarter. Arthur B Cohen and Joseph Healey’s Healthcor Management LP also made a $14.6 million investment in the stock during the quarter. The other funds with brand new NUVA positions are Clint Carlson’s Carlson Capital, Dmitry Balyasny’s Balyasny Asset Management, and Paul Marshall and Ian Wace’s Marshall Wace LLP.

As you can see these stocks had an average of 16.75 hedge funds with bullish positions and the average amount invested in these stocks was $463 million. That figure was $267 million in NUVA’s case. Iovance Biotherapeutics, Inc. (NASDAQ:IOVA) is the most popular stock in this table. On the other hand Manchester United PLC (NYSE:MANU) is the least popular one with only 10 bullish hedge fund positions. Compared to these stocks NuVasive, Inc. (NASDAQ:NUVA) is more popular among hedge funds. Our calculations showed that top 20 most popular stocks among hedge funds returned 24.4% in 2019 through September 30th and outperformed the S&P 500 ETF (SPY) by 4 percentage points. Hedge funds were also right about betting on NUVA as the stock returned 8.3% during Q3 and outperformed the market by an even larger margin. Hedge funds were clearly right about piling into this stock relative to other stocks with similar market capitalizations.