It is not easy to find a smartphone with a good battery, but we identified 7 smartphones with quick charge: fastest to recharge from 0 to 100. Interestingly, Apple’s iPhones are lagging on this front. Even though phone technology has vastly improved in recent years, battery charge hasn’t been keeping the pace.

While dumb phones could last for several days on a single charge, that does not seem to be case with today’s smart phones. The culprits are the several new features offered by smartphones, like wifi, large screens, and powerful processors. The details that make us want to use our phones drain the battery. Batteries are getting larger so it takes more time to charge them. The good news is that there are still some efficient smartphones out there. The 7 smartphones with the best battery life does not include Apple’s iPhone!

We found sites that spent a good deal of time testing phone charging speeds, including tomsguide.com, phonearena.com and anandtech.com, in order to rank the 7 smartphones that are the fastest to recharge from 0 to 100. There is some variation in numbers, so we calculated an average time for each phone based on the results presented by the aforementioned websites. Generally, consensus estimates are more accurate than estimates made by a single source. 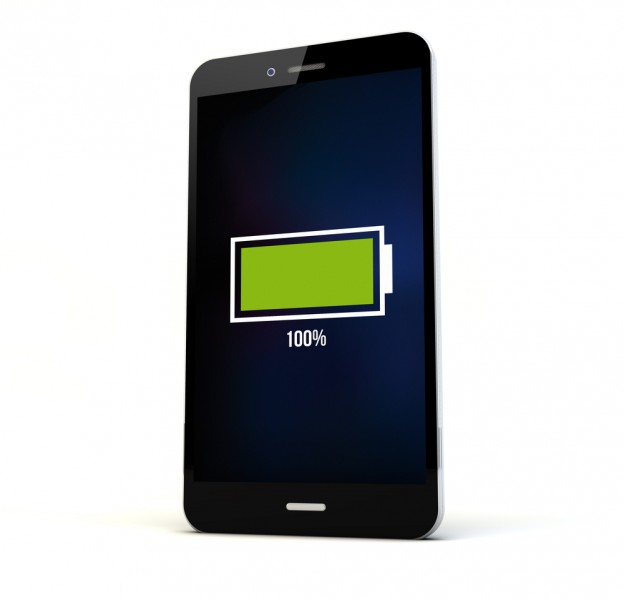 Strangely, Apple Inc. (NASDAQ:AAPL) has failed to commit its resources towards improving the charge speed of its phone. This is why the iPhone 6 fails to feature on this list, with a charge time of around 2 hours and 15 minutes. In fact, the small battery has been one of the few weak points of the iPhone, although it did not offset its popularity among consumers. The new iPhone 6S, which has been announced recently has an even smaller battery than its predecessor, sporting a capacity of only 1715 mAh, compared to the iPhone 6 capacity of 1810 mAh.

The Wall Street Journal has reported that the iPhone 6s has also failed to improve in this category, with a charging time of over 2 hours. It is really surprising that the iPhone has such long charging times, taking into account the fact that many of the smartphones that are featured in our ranking have larger batteries. For example, the Samsung Galaxy S5 and S6 Edge have batteries of 2800 mAh and 2600 mAh, respectively, and they ranked on the seventh and second spots respectively.

Another Android-based phone that is featured in our ranking is Google Nexus 6. Generally, Google Inc (NASDAQ:GOOG) has done an amazing job with the Android software. It has a great impact on the charging time and Google has done even better with its own smartphone, the Nexus 6, which has a charging time of under two hours. What’s even more impressive is that the Nexus 6 features a battery of 3220 mAh (almost twice the size of the iPhone 6S).

Until a couple of years ago, one of the main reasons for consumers choosing Apple Inc. (NASDAQ:AAPL)’s iPhone over cheaper smartphones based on Google Inc (NASDAQ:GOOG)’s Android OS was quality. However,  a small detail like battery capacity and the charging time shows that the quality gap is closing. So far, the iPhone leads the herd of consumers in the US, where it holds a market share of over 43%, followed by Samsung with around 28%. On the other hand, consumers in China are already noticing the improvement in the quality of other brands and at the end of June, Xiaomi and Huawei became the largest suppliers of smartphones with shares of 15.9% and 15.7% respectively, with Apple Inc. (NASDAQ:AAPL) coming in on the third spot.

Some say Apple must urgently find solutions to stay again ahead of the competition in this regard.  They need to find an innovative way that could charge the iPhone in less than an hour or keep the battery running longer. The main reason we think this is that the iPhone currently represents the largest contributor to Apple’s revenue and if Apple fails to keep its market share solid, it risks losing the confidence it currently has from investors (see on which spot it ranked among the hedge funds’ favorite stocks). Some of the most brilliant hedge fund managers out there already dumped their entire Apple stake at the end of June, thus avoiding the 10+% decline in Apple shares. For example, Billionaire Mandel had one of the largest positions in Apple at the end of the first quarter, yet he got rid of his entire $850 million position by the end of June. Apple’s latest financial results have been negatively received by investors only because the company didn’t meet the sales estimate for the iPhone, even though it managed to beat the results across most other metrics. Overall, it is our belief that the perceived quality gap between Apple’s iPhones and much cheaper smartphones offered by Google Inc and other manufacturers is closing. We don’t think Apple’s moat is strong enough to survive a recession when consumers will be more likely to try and discover that putting together a smartphone isn’t rocket science.

Let’s get back to our ranking and see which smartphones currently beat Apple’s iPhones and rank as the best in terms of charging time from 0 to 100.

Hedge Funds Are Wary Of These Three Collapsing Stocks
Monthly Newsletter Strategy
Download a free copy of our newsletter and see the details inside!
Hedge Fund Resource Center
Lists