We at Insider Monkey have gone over 700 13F filings that hedge funds and prominent investors are required to file by the government. The 13F filings show the funds’ and investors’ portfolio positions as of June 30. In this article, we look at what those funds think of Altria Group Inc (NYSE:MO) based on that data.

Altria Group Inc (NYSE:MO) ownership among hedge funds dropped for a third straight quarter in Q2, though by a narrow margin. Nonetheless, the stock trails that of rival Philip Morris International Inc. (NYSE:PM), which was owned by 23% more hedge funds as of June 30. Altria Group Inc (NYSE:MO) was more profitable than PM in 2017, in fact being one of the 11 Most Profitable Companies In America in 2017, though it could muster less than 1/3 of Apple Inc. (NASDAQ:AAPL)’s immense $45.69 billion in earnings. Altria Group also returns plenty of those earnings to shareholders in the form of healthy dividend payments, which currently have a yield of 5.03%. Its nearly five decades of continuous payments landed it in 3rd place on our list of the 25 Best Dividend Stocks for Retirement.

What does the smart money think about Altria Group Inc (NYSE:MO)?

At Q3’s end, a total of 35 of the hedge funds tracked by Insider Monkey held long positions in this stock, a 3% dip from one quarter earlier. On the other hand, there were a total of 34 hedge funds with a bullish position in MO in the middle of 2017. With hedgies’ sentiment swirling, there exists an “upper tier” of noteworthy hedge fund managers who were boosting their holdings considerably (or already accumulated large positions). 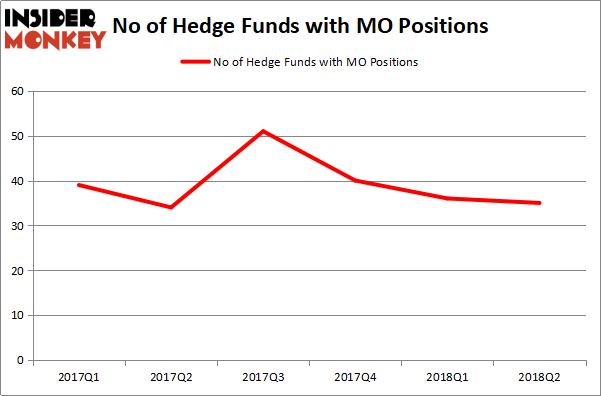 The largest stake in Altria Group Inc (NYSE:MO) was held by Gardner Russo & Gardner, which reported holding $314.7 million worth of stock as of the end of June. It was followed by Citadel Investment Group with a $225.3 million position. Other investors bullish on the company included Wintergreen Advisers, Governors Lane, and Woodford Investment Management.

Judging by the fact that Altria Group Inc (NYSE:MO) has experienced declining sentiment from the entirety of the hedge funds we track, it’s safe to say that there lies a certain “tier” of hedge funds who sold off their full holdings in the second quarter. At the top of the heap, Doug Silverman and Alexander Klabin’s Senator Investment Group dumped the largest investment of the 700 funds followed by Insider Monkey, worth about $81 million in call options. Matthew Mark’s fund, Jet Capital Investors, also cut its call options, about $24.9 million worth. These transactions are interesting, as total hedge fund interest dropped by 1 fund in the second quarter.

As you can see these stocks had an average of 52 hedge funds with bullish positions and the average amount invested in these stocks was $2.87 billion. That figure was $1.24 billion in MO’s case. salesforce.com, inc. (NYSE:CRM) is the most popular stock in this table. On the other hand Toronto-Dominion Bank (USA) (NYSE:TD) is the least popular one with only 17 bullish hedge fund positions. Altria Group Inc (NYSE:MO) is not the least popular stock in this group but hedge fund interest is still below average and declining. This is a slightly negative signal and we’d rather spend our time researching stocks that hedge funds are piling on.