Our 25 best science jokes for kids show how hilarious science can be and not as mysterious and complicated as it seems.  Sometimes I wonder how kids survive their early ages with so much being thrown at them at once. So many expectations from the time they are conceived, moved in the uterus, first eye contact, first words, and so on. So by the time they can understand words and laugh about silly things parents do or say to try to engage them, jokes become part of their lives, either for fun, for social engagements, as a tool for educators to teach boring topics, or just for their own pleasure. So these 25 best science jokes for kids can be very entertaining.

There are different strategies to communicate with kids including a more relaxed approach to facts when combined with a bright sense of humor will make the little one smile. People do all sorts of things just to make a kid smile. You can make weird noises, put on a silly face, or blow water through your nose to make toddlers giggle. Once they grow older, and as their level of understanding grows, you can crack a joke or two to brighten them up, whereas developing a good sense of humor can make children more intelligent and healthier. 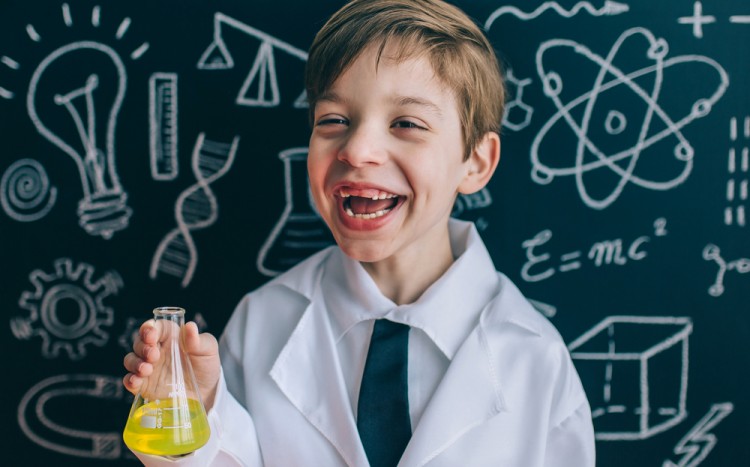 Kids with a good sense of humor do better and grow up more optimistic than the ones that lack humor. They can:

Just like any other jokes, kids enjoy science jokes a lot more than adults not because they’re plain stupid, but because they give more value to stupidity as a source of laughter. So, when Einstein said ‘’the only difference between stupidity and genius is that genius has its limits,” what he was actually trying to say is that there are no limits to a kid’s appetite to laughter. Like in this example:

Q: Why didn’t the skeleton go to the ball?
A: Because he had no BODY to go with!

Most people believe that kids inherit humor from their parents. But, a strong sense of humor is practically developed in kids. And, creative science jokes also helps while teaching kids how science works. For that, you need to have an arsenal full of scientific jokes. These 11 Best Science YouTube Channels to Watch will help you do that.

And, it’s the kids who come up the funniest and weirdest science jokes, like this one:

Q: What runs faster, hot or cold?
A: Hot. Because you can catch a cold!

Since all science jokes are funny, it is tricky to rank the funniest. Besides, science jokes are subject to ‘subjects’ like physics, chemistry, space, biology, etc. In order to identify and rank the best science jokes, we selected multiple sources (gosciencegirls, sciencefun, ducksters, sciencekids, jokesbykids ) and came up with the jokes. Those jokes that are picked by at least 2 of these sources are ranked higher than the others. All the jokes that were not found in any one or two of these sources were given a big number (40) so that we could come up with a more realistic aggregate ranking.

The top 3 ranked jokes in our 25 best science jokes for kids are the funniest jokes you have ever heard! Time for a big hee-haw!