Hot dog! There is nothing like sinking your teeth into a juicy frank. And after you stopped biting that man, you’re going to be hungry. It’s time to check out the variety of your favorite hot dogs here on our list of 21 best hot dog joints in New York City.

One of the easiest foods to prepare you can grill it, fry it, microwave it, or boil it–among other recipes.  But please just grill it like a respectable person would do. There might be nothing grosser than a boiled hot dog. Oh, wait, yes there is–a microwaved hot dog.

The hot dog is one of New York City’s greatest street foods.  A great and cheap midday lunch, a respectable dinner on the go and an odd but satisfying breakfast. Don’t knock it ’til you try it–just because ti looks like it’s emerging from dirty bathwater doesn’t mean it won’t taste like heaven in your mouth. 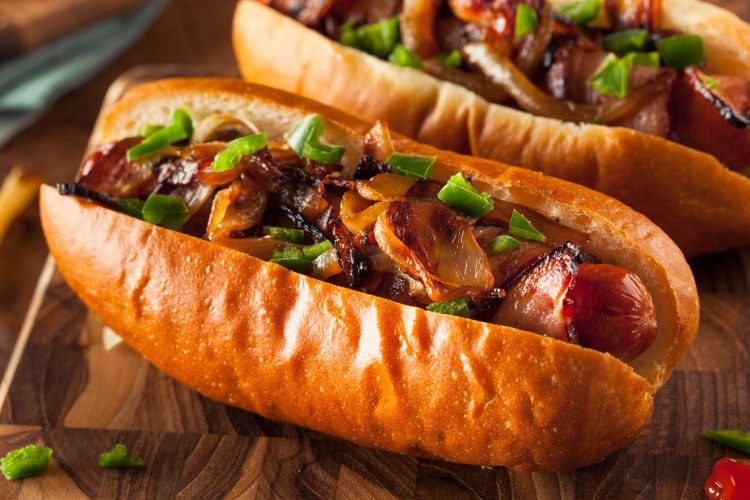 I get some weird looks when I proclaim my love for these hotties, but who cares? The juicy flavors from who knows what is worth the judgment. Some fun facts about hot dogs include their alternative names like frankfurter, frank, wiener, weenie, cony, and red hot. Some of these come from the disputed origins of the hot dog–which, like most religions, is hotly debated, shrouded in mystery and speckled with controversy.  The name Frankfurter, later on shortened to frank, is from Frankfurt, Germany. Many would dispute the claim of hot dog’s birthplace like people from Vienna, Austria or Wien in Germany–from which “wiener” was derived.  It was Charles Feltman who brought hot dog in New York in 1867.

Hot dogs are processed in manufacturing plants that is strictly monitored by the USDA to ensure that they are following the federal rules to be able to produce hot dogs according to health standards.  Seasonings and spices necessary hot dogs flavorful are also added, along with curing agents to maintain freshness, and, as I’m convinced, magic.

The USDA requires that hot dogs are not more than 30% fat and not less than 10% water.  Hot dogs are made of meat trimmings, these are pieces of meat that are too small to sell on their own.  Since protein is found in meat, I say hot dogs can be a source of protein for its primary ingredient is meat.  Hot dog plants can produce half a million in just one day!

Different themes can be made up in preparing your hot dogs.  This can go with buns, eggs, rice, and of course any condiments or toppings you can think of–diced cucumbers and tomatoes are pretty great.  Also, for the record, mustard is right and ketchup is wrong.

Regardless of what you put on it, you need to find it first. We have rounded up the best hot dog selling joints in New York City and through the help of Yelp got hold of their rating.  They may offer different hot dog delicacies but that ensures customer satisfaction.  If you’re tired of cheap lunches you can also read up on the 11 Most Expensive Restaurants in New York .