During the past five years, engineers at Apple Inc. (NASDAQ:AAPL) have managed to upend the consumer electronics industry, delivering a full suite of products that have now found a home in living rooms and on office desks around the world. The rest of the industry can only sit by and watch as Apple moves even further ahead of the pack, setting the stage for robust sales in 2013 and beyond.

Yet Apple’s product development machine may not be this company’s most impressive aspect. Instead, it’s the company’s fiscal management of operations, as a high volume of sales is generated on a relatively low level of overhead. With each passing year, Apple’s operating and net profit margins keep rising higher. 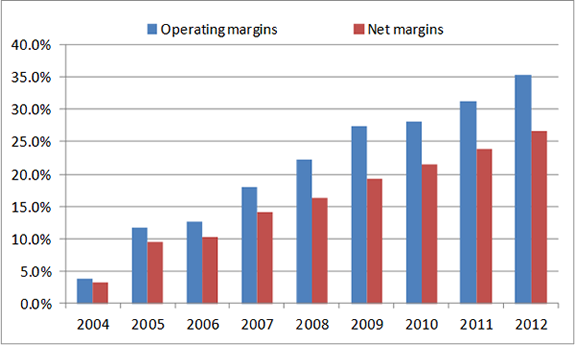 I scanned the S&P 500 and a mid-cap index, the S&P 400, and managed to find 27 companies even more impressive than Apple.

The check collectors
It may not always be a fair fight. A few of these companies exist mainly to collect royalty checks and have almost no overhead. So if you’re just waiting for checks to arrive in the mail, then it’s easy to look quite profitable. These firms own profitable patents or interest in mines, and include:

Companies that run the world’s top market exchanges and financial transactions services networks also sport great margins. After all, most stock trading and credit card processing are electronically automated, so they require very little human oversight to function smoothly. These firms include:

Drilling for oil and gas can be quite lucrative as well. Firms in the energy sector with even more impressive margins than Apple include:

You’ll also find a handful of real estate investment trusts (REITs) that are even more profitable than Apple, as they also carry very little overhead for the sales they can generate. These include:

But what about companies that make money the old-fashioned way? After all, Apple is tasked with actually building, stocking and marketing real products — and that takes money. Remarkably, there are 11 companies that are also faced with these costs and are still more profitable than Apple. 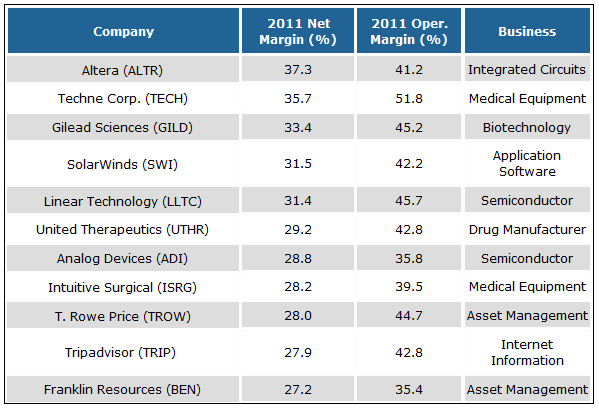 It should come as no surprise that biotech firms Gilead Sciences, Inc. (NASDAQ:GILD) and United Therapeutics Corporation (NASDAQ:UTHR) are quite profitable. While key drugs are shielded from generic competition, they can fetch high prices and cost little to make. What should you expect to happen when these key drugs lose patent protection? Well, Merck & Co., Inc. (NYSE:MRK) and Pfizer Inc. (NYSE:PFE), a pair of industry bellwhethers, had operating and net margins in the low to mid-teens in 2011.

You’ll note other top-quality operators in the table above. Intuitive Surgical, Inc. (NASDAQ:ISRG), for example, has become a powerhouse in the field of spinal surgery, with sales likely to exceed $2 billion this year. But the company’s hefty $21 billion market value means this company trades for around 36 times projected 2012 profits. That’s rich.

The key is to find these great companies when they are temporarily out of favor, which is surely the case with chip maker Altera Corporation (NASDAQ:ALTR). The company has recently traded down to two-year lows on subdued fourth-quarter guidance. But analysts say the company is poised for renewed strength in 2013 as advanced wireless networks, known as LTE, are more deeply deployed in emerging markets such as China and India. Altera is a leading provider of specialized chips, known as programmable logic devices (PLDs), which are used in many LTE networks.

How efficient has Altera become thanks to its low-cost, high-margin business model? Consider that the cumulative $1.6 billion in free cash flow generated during the past two years is as much as the free cash flow generated in the prior five years — combined. Nearly one-third of Altera’s market value is represented by the company’s $3.1 billion net cash balance, and when you exclude the cash, Altera’s free cash flow compares quite favorably to the company’s enterprise value. This translates into a free cash flow yield in excess of 10% in each of the past two years. This kind of reasonable valuation is hard to find in companies with ultra-high profit margins.

Risks to Consider: Many of these companies have been able to boost margins throughout the current cycle, though an economic slowdown would likely lead to a bit of negative margin leverage.

Action to Take –> Apple — and its high-margin peers — have established very impressive track records. Leading-edge products that carry firm pricing — coupled with a very tight lid on overhead — are the secrets to their success. If you’re looking to invest in stocks as successful as Apple, then the ones I’ve mentioned here are a good place to start your research. For the best upside potential, look for the ones that are temporarily out of favor, as is the case with Altera.

Is eBay a Better Buy Than Amazon.com, Inc. (AMZN)?