The 11 countries with the highest standard of living in the world in 2017 are the epitome of excellence and a benchmark for the other countries to strive towards.

Despite the resources many possess, a lot of the people in the world live in abject poverty without access to basic supplies such as food, sanitation and a roof over their head. A quick look at the statistics surrounding global poverty make for a gloomy reading: nearly 3 billion, or just under half of the global population, makes less than $2.50 a day. This includes 1.3 billion people who live in extreme poverty, only managing to earn around $1.25 in a day. Of the 3 billion mentioned, a third, or around 1 billion people, are children. It is heart wrenching to even imagine a child being deprived of not just luxuries, but even bare necessities. These people don’t live, they merely survive. Every day, they wonder where their next income will come from, or whether they’ll get three meals in a day. These people cannot afford to send their children to school, resulting in their children growing up illiterate, which severely restricts their chances of getting a good job; therefore, the cycle continues. 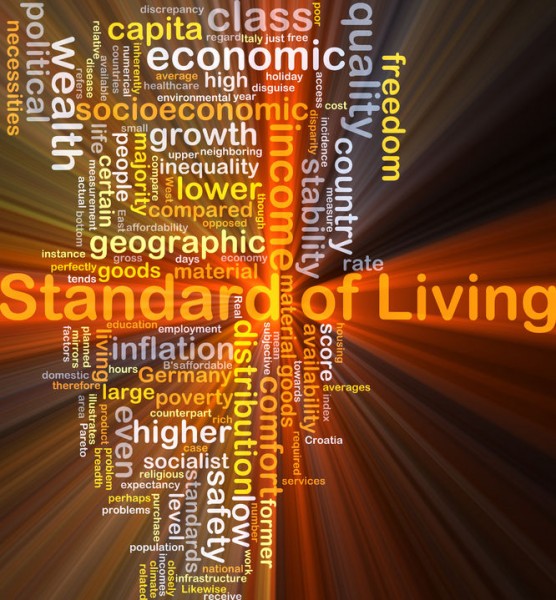 On the other hand, there are countries where even the poor have a better life than an average citizen in a developing country. These countries generally have extremely high income taxes, but such taxes are used to develop infrastructure, healthcare, and education, and you will discover that both healthcare and education are often free in such countries. These countries have maintained an extremely high standard of living mainly not because they have access to the necessary resources, but because they have used them in an optimum manner.

How exactly do you define the standard of living, though? According to the OECD Better Life Index, these standards include housing, income, job, education, environment, community, health, life satisfaction and the work life balance. While these are generally standards which cannot be quantified, the OECD has managed to do exactly that, by calculating job security, employment rates, salaries, disposable income, student skills, access to education, water quality and so much more. However, while the citizens have a good life, there is still income disparity even in these nations, with the top 20 percent often being many times better than the bottom 20 percent. Only when this disparity is ended will the nations be truly perfect.

Whether you are considering moving or whether you are simply curious about the about the quality of living in the best countries in the world, the list of 11 countries with the highest standard of living in the world in 2017 is sure to capture your attention. If just one article on this topic is not enough to satisfy you, head on over to the 25 Countries With the Best Quality of Life in the World.

To determine our rankings, we used the OECD Better Life Index 2016, which calculated scores for the countries according to the aforementioned rankings. We calculated the rank of all countries for each criterion and used their average to find out the overall ranking for each country in the Index. We complimented this by using Numbeo’s Standard of Living Index for 2016. We then used the average of both rankings to determine quite accurately, the countries which have established an extremely high standard of living.