Wondering about most successful immigrant in USA and their companies? Great, you’ve come to the right page.

A few days ago, Forbes published its annual Forbes 400 list, featuring the richest people in the U.S. The podium did not offer any surprises, as Bill Gates occupied the top spot for the 23rd year in a row, followed by Amazon.com, Inc. (NASDAQ:AMZN)’s Jeff Bezos and Berkshire Hathaway Inc. (NYSE:BRK.A)’s Warren Buffett.

One of the most interesting aspects of this year’s list was the number of immigrants it included. “More Than 10% Of The Forbes 400 Are Immigrants, 14 Of Whom Are Richer Than Trump,” a Forbes article’s title read. In fact, 42 out of the 400 richest Americans were not born in the land of opportunity, but in 21 other countries instead. Six of them came from Israel; five, from India; four, from Taiwan; and four, from Hungary. 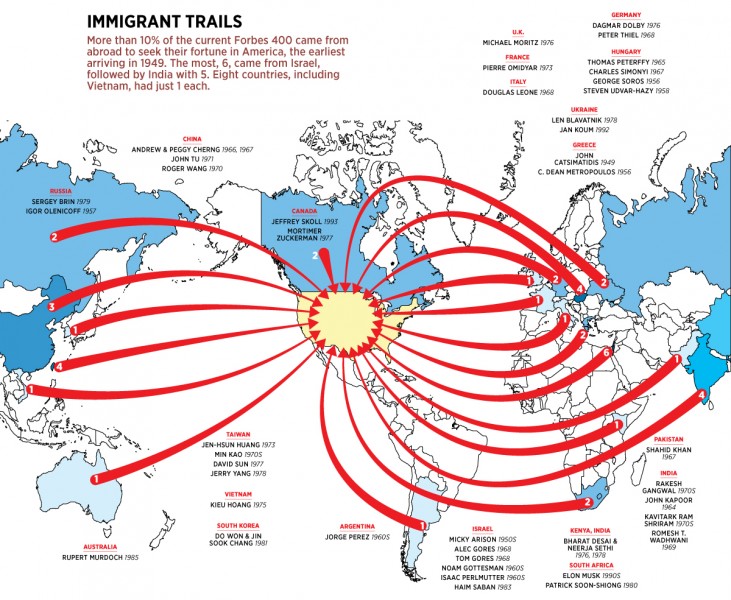 As per Forbes’ calculations, these immigrants’ combined net worth stands around $250 billion, definitely not a figure to scoff at. But, how did they get so successful?

A recent report from the Kauffman Foundation explained that, “Immigrants are twice as likely to become entrepreneurs as native-born Americans. Immigrant entrepreneurs have begun and lead some of the world’s most successful and innovative companies. The risk-taking that defines an immigrant’s experience in starting anew in a new country often continues to benefit immigrant entrepreneurs as they channel a healthy appetite for risk in a way that leads to new business ideas.”

“In the United States, immigrants tend to be unusually entrepreneurial: available data suggest immigrants are over-represented within the group of business founders and innovators,” contributor Sari Kerr added, pointing out that the highest rates of immigrant ownership were seen in the engineering and technology sectors.

So, in this article we will take a look at the 10 most successful immigrant in USA and their companies.

Why NVIDIA, Manitowoc, Union Pacific, and More Are in the Spotlight