Keep on rockin’ in the free world with our 10 easiest acoustic rock songs to play on guitar for beginners.

I feel that somehow acoustic guitars are underappreciated in rock music. When they think about acoustic guitar, most people picture a country singer or a dude in a bar that is performing some watered down tunes to entertain the handful of guests. There is no doubt rock music is more associated with the electric guitar, power chords, heavy riffs, and distortion, but that doesn’t mean that there is no place for an acoustic guitar there. Some of the best songs in rock are played with an acoustic guitar. Did you see anyone cry because of “Highway to Hell”? Maybe, but doubtfully. What about “Tears in Heaven” by Eric Clapton or let’s say the cover of “Hallelujah” by Jeff Buckley? Most certainly. Maybe I am overreacting, but I hope you can see my point. If not, let me explain. 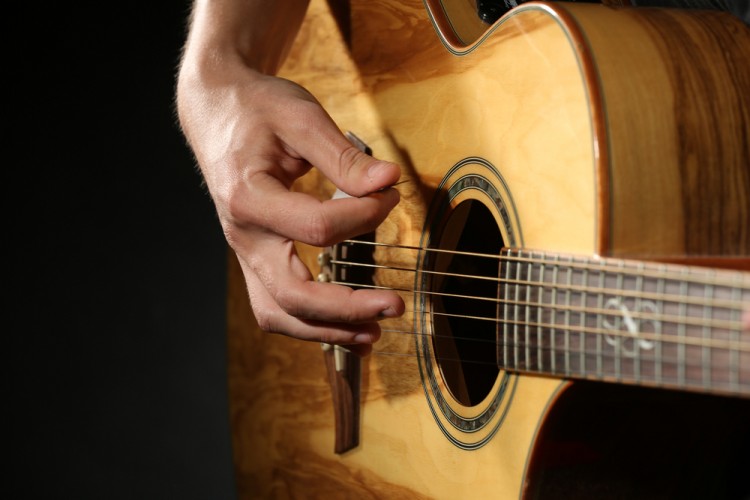 Most songs written for electric guitar can be played on an acoustic one and vice versa. But electric and acoustic guitar have specific roles in rock music. The electric guitar is used for faster-paced songs that often uplift you and get your adrenaline pumping when you hear those crushing riffs or mesmerizing solos. Acoustic guitar can’t do that because the sound of the acoustic guitar is better suited for songs that are filled with emotion. You may disagree with me all you want but an amazing acoustic rock ballad can move me more than any solo from Steve Vai or Slash. If you are not a fan of either, but the folk music makes you tick, then check out these 10 Easiest Folk Songs to Play on Acoustic Guitar.

Having moved that out of our way, let’s turn our attention to you, guitar beginners. Playing acoustic and electric guitar are two different worlds. I am not talking about the way electric guitar needs an amplifier and similar stuff. I am talking about the style of playing and finer details. When someone who wants to learn to play guitar asks me should he/she first pick up the electric or acoustic guitar, I say acoustic without any hesitation.  Not because I prefer it. I genuinely like playing electric guitar more since it gives you a much wider range of sounds. I recommend acoustic first because the transition from an acoustic guitar to electric one is a lot easier than another way round.  Acoustic guitars have wider string spacing and heavier strings so it will be harder at the start, but your fingers will become more trained and you will benefit in the long run.

I hope you picked an acoustic guitar as your starter since we are about, to begin with, our list of 10 easiest acoustic rock songs to play on guitar for beginners. To compile our list we took recommendations from Guitar Treats, Guitar Player and String Vibe among others. They all listed songs that are easy to play on the acoustic guitar. From those we picked the ones that belong to rock genres, have fewer chords and are not complex for beginners. So, let’s take a look.