Published on September 29, 2015 at 3:37 pm by Sure Dividend in Dividend Stocks, News, Stock Analysis

By comparison, Dr Pepper Snapple Group Inc. (NYSE:DPS) is tiny.  The company has a market cap of ‘just’ $14.7 billion – less than one-tenth the size of Coca-Cola. Cedar Rock Capital invested one quarter of its assets in the stock and owns a large percentage of Dr Pepper’s outstanding shares. DPS is also very popular among quant hedge funds. AQR Capital, Renaissance Technologies, and Gotham Asset Management are among top 10 hedge fund holders. Interestingly short seller Jim Chanos also has a large position in the stock which indicates that the company is one of the best in its industry.

Unlike its larger rivals, Dr. Pepper Snapple Group does not have a global presence.  The company operates in the United States, Canada, Mexico, and the Caribbean.  In 2014, sales broke down geographically as follows:

The company’s smaller geographic area allows it to better focus its advertising messages and spending.  The United States is by far the company’s most important market.

Dr. Pepper Snapple Group was created in 2008 when the company was spun-off from Cadbury Plc.

The image below gives a quick glance of the company’s brands.

The company’s most recognizable brands include:

The company also has its ‘Core 4’ consumer soft drink brands (shown below). 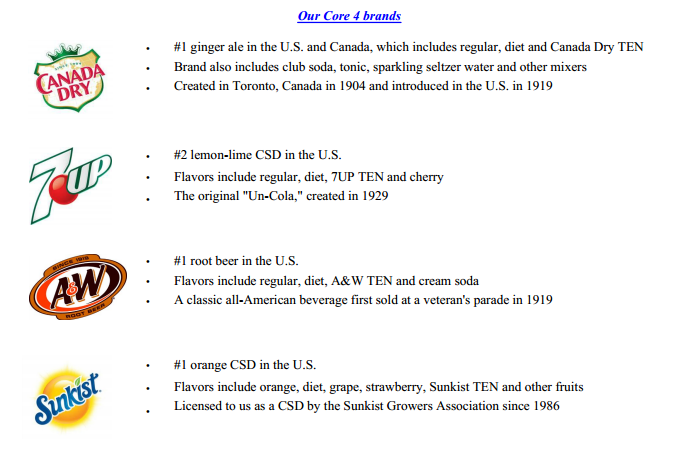 Related Insider Monkey Articles
Hedge Funds Beat Analysts On Seeing Weakness In Mattel And Caterpillar, But...Valeant Could Face Subpeona But Here’s Why You Should Buy It AnywayThe Latest Moves of 2 Top Hedge Funds and One Bullish Pick You Might Want to...
Hedge Fund Data Suggest You Should Go Long One of These Two Monday LosersThree Biotech Stocks Are Down Today but Hedge Funds Say They Are Not OutBoaz Weinstein’s Saba Capital Faces Lawsuit as Hemorrhage Continues
Monthly Newsletter Strategy
Download a free copy of our newsletter and see the details inside!
Hedge Fund Resource Center
Billionaire Hedge Funds